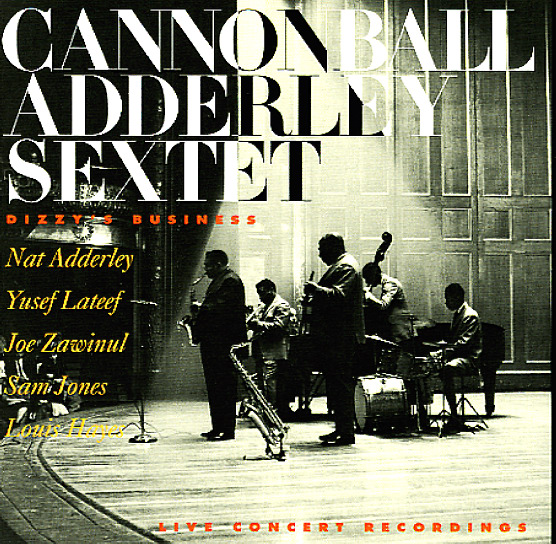 Rare work by Cannonball Adderley – recorded in the early 60s, but not issued until after his death! The album features live material – recorded in Tokyo and San Francisco – performed by Cannon's amazing sextet that includes Joe Zawinul on piano, Yusef Lateef on reeds, Nat Adderley on cornet, and the rhythm section of Sam Jones in bass and Louis Hayes on drums. Tracks are all long and grooving – with a sublime mix of the earlier soul jazz that Adderley forge in the late 50s, with some of the more exotic traces that were coming into the group through the work of Lateef. Titles include "New Delhi", "Peter & The Goats", "This Here", "Jive Samba", "Primitivo", "Autumn Leaves", "Dizzy's Business", and "Never Say Yes".  © 1996-2022, Dusty Groove, Inc.

Paris 1960
Pablo, 1960. Used
CD...$6.99 9.99
Can't get enough Cannonball Adderley during this magical point in his career – the time when things were really coming together for his uniquely soulful sound, as you'll hear in this set! The live date's got all the crackle and fire of famous Adderley albums for Riverside – and it ... CD

13th House
Milestone/OJC, 1980. Used
CD...$12.99
A really majestic set of tracks from McCoy Tyner – recorded at the end of the 70s, but easily one of his best records of that fruitful decade! The group's a large ensemble – and the feel is in that perfect searching spiritual soul jazz mode that Tyner focused on as the 70s wore on ... CD