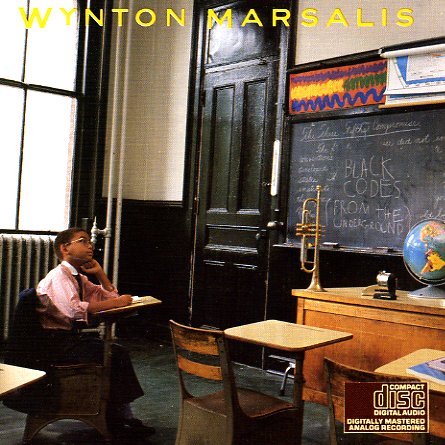 Black Codes – Notes From The Underground

Live At Blues Alley
Columbia, 1988. Near Mint- 2LP Gatefold
LP...$16.99
An open-ended live set from Wynton Marsalis' 80s run for Columbia Records – and a set that's sometimes a bit more unbridled than his studio work at the time! There's still plenty of the Marsalis manner in place here – that great talent for subtle shadings, and quiet exploration of ... LP, Vinyl record album

Think Of One
Columbia, 1983. Near Mint-
LP...$5.99
Wynton Marsalis' second date for Columbia Records, and an album that already has him stretching out from the first! Unlike before, when Wynton was given a few older players to help establish his sound, the group here is all Marsalis' own – with brother Branford on tenor and soprano sax, ... LP, Vinyl record album

J Mood
Columbia, 1986. Near Mint-
LP...$9.99
Wynton Marsalis is working in lean quartet formation here – no sax from brother Branford, whose own star was rising – and instead lots more room to really stretch out on his own languid lines on trumpet! The rest of the quartet features Marcus Roberts on piano, Robert Hurst on bass, ... LP, Vinyl record album