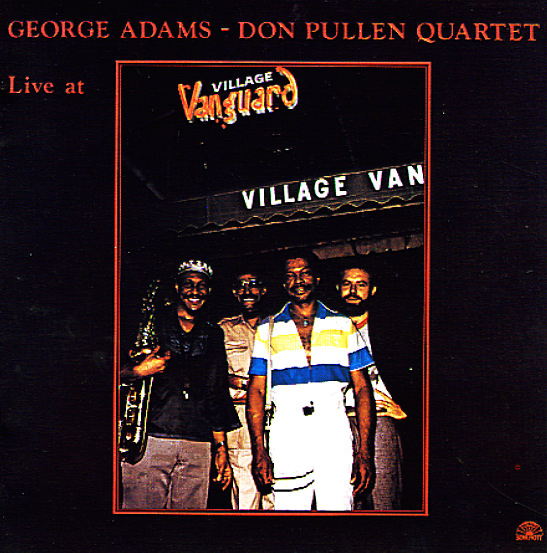 Don't Lose Control
Soul Note (Italy), 1979. Very Good+
LP...$14.99
A trashy cover, but a great little record – one that's filled with wonderfully sensitive sounds from the team of George Adams and Don Pullen – working here in some really relaxed, soulful territory! The album's got a laidback feel that's a nice change from some of the more cerebral ... LP, Vinyl record album

Tom Varner Quartet
Soul Note (Italy), 1980. Near Mint-
LP...$9.99
A really unusual date for Tom Varner – a player we often hear in straighter company, but who works here in a very angular sort of mode! The group features no piano at all – just Varner's flugelhorn and the alto sax of Ed Jackson, out front of bass by Fred Hopkins and drums from Billy ... LP, Vinyl record album

For Stu
Soul Note (Italy), 1979. Near Mint-
LP...$14.99
An album dedicated to the late drummer Stu Martin – and a set that features some very dynamic drum work from longtime friend Barry Altschul! The album has Altschul really hitting some new notes in his music – stepping off with a bit more dynamic energy than some of his other 70s ... LP, Vinyl record album

Invitation
Soul Note (Italy), 1982. Near Mint-
LP...$16.99
Great work from Billy Bang's early 80s years on Soul Note Records – a time when he really seemed to find a new focus in his music – totally taking off in great new directions that are always a joy to discover! There's a positive feel to this record that's undeniable – a pushed-for ... LP, Vinyl record album

Elements
Soul Note (Italy), 1986. Near Mint-
LP...$14.99
A really soulful groover from the glory days of the Soul Note scene – a killer set that crackles with the kind of energy of some of the best 70s sides on Muse, like work by Woody Shaw or Kenny Barron. Pianist Michael Cochrane leads a hip quintet with Tom Harrell on trumpet and Bob Malach on ... LP, Vinyl record album

Vertical Form VI
Soul Note (Italy), 1977. Near Mint-
LP...$19.99
An important larger work from George Russell – a suite for jazz orchestra, and one that offers up a mix of cool keyboards and dark-toned reeds! The ensemble is a fairly large one, but the record still retains a good sense of space – a slow-building quality that's almost more evocative ... LP, Vinyl record album

Ebu
Soul Note (Italy), 1984. Near Mint-
LP...$24.99
Deeply soulful work from Hamiet Bluiett – a set that's a bit more inside than some of his other work, but still with a great sort of edge overall! There's a hip swing to most numbers here – thanks to a mostly-inside rhythm trio that features John Hicks on piano, Fred Hopkins on bass, ... LP, Vinyl record album