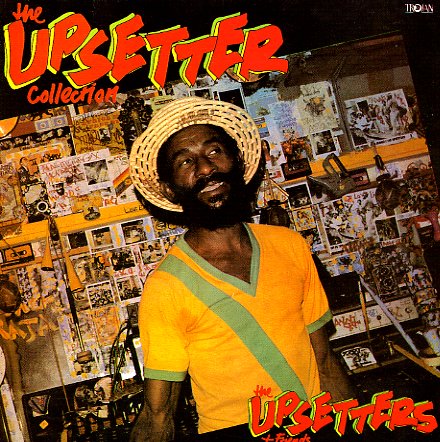 A nice selection of Upsetters tracks, and other Perry productions, from 1969-1973. Though he had yet to make the mothership connection through the Black Ark, his vision is fully formed on all these funky numbers, and it's clear where much of his inspiration was coming from with "Freak Out Skank"and other numbers like "Cold Sweat". A total of 16 groovy Scratch creations, mostly by the Upsetters: "Return Of Django", "Django Shoots First", "The Vampire", "Drugs & Poison", "Sipreano", "Black IPA", "Tipper Special", and the "French Connection", plus The Bleechers "Check Him Out", The Gatherers "Words Of My Mouth", Carlton & His Shoes "Better Days", and the Perry numbers "Cow Thief Skank", "Bucky Skank" and "Kill them All".  © 1996-2021, Dusty Groove, Inc.
(Out of print.)

Scratch The Upsetter Again (with bonus tracks)
Trojan/Sanctuary (UK), 1970. Used
CD...$9.99
Nice batch of early 70s cuts by Lee Perry, replete with his unique approach and the roots of the out there production and songwriting skills that Lee would use to transform Jamaican music for decades to come! Taken from the LPs Scratch The Upsetter Again and Eastwood Rides Again, filled with the ... CD

Trojan Presents Lovers Rock – 40 Romantic Reggae Classics 1976 to 1990
Trojan (UK), Late 70s/1980s. Used 2 CD
CD...$9.99
A really great collection – and a sublime introduction to the lovers rock genre – a style that's way more than just the "romantic" modes promised in the title, and instead offers up a key Jamaican interpretation of mellow soul styles! The span of work stretches from those ... CD

Trojan Presents The Producers – 40 Jamaican Classics 1960 to 1984
Trojan (UK), 1960s/1970s/Early 80s. Used 2 CD
CD...$18.99
A great little set that looks at the important role of the producer in Jamaican music – quite crucial, given that in reggae, rocksteady, and dub – the studio almost stands as another instrument contributing to the tune! And the package doesn't just focus on key producers, but also ... CD

Beat Down Babylon – The Upsetter Years
Trojan (UK), 1970s. Used
CD...$14.99
Like so many vocalists, Junior Byles shone brightest under the guidance of Lee Perry, and this excellent retrospective collects more than just a few of the great Jamaican soul sides he'd cut under his production. All of these numbers have the spare loping groove, with nice organ lines and bouncing ... CD