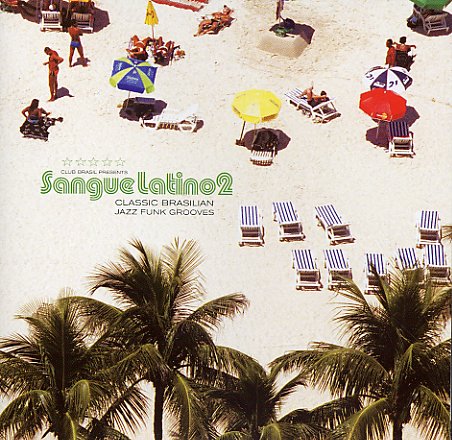 A great idea for a compilation – older Brazilian grooves re-done by a collective of younger artists! The choice of tunes is impeccable – and tracks include tunes first made famous by the likes of Marcos Valle, Lo Borges, Joyce, Kitty Winter, Sergio Mendes, and others – all performed by a core group of musicians who work the grooves with loads of jazzy touches! Instrumentation includes keyboards, flute, and guitar – and all tracks have vocals from a rotating array of singers that include Ive Mendes, Lisa Brown, and Victoria Newton. The whole thing's great – as wonderful (perhaps more so) as any recent projects of this nature from Far Out or Mr Bongo – with titles that include "Mentira", "O Trem Azul", "Tarde Em Itapoan", "The Real Thing", "Brazil Night", "Feminina", and "Three Angels".  © 1996-2020, Dusty Groove, Inc.
(Out of print.)

Return Of Tom Ze – Hips Of Tradition – Brazil Classics 5
Luaka Bop, 1992. Used
CD...$2.99
A great return for the legendary Tom Ze – an artist who'd been brought back to prominence via the efforts of a Luaka Bop compilation – then given this great chance to record for the label on his own! The set's a great return to form for Ze – who sprung from this moment into a ... CD

Herbie Mann & Joao Gilberto With Antonio Carlos Jobim
Atlantic (France), 1966. Used
CD...$14.99
Although Herbie and Joao are listed together in the artist credits together for the record, they don't really play together on the record – as did Joao and Stan Getz on their album together. Instead, they trade off tracks of bossa nova material, recorded with Jobim in Rio – Joao's by ... CD

Samba Esquema Novo De Novo
Far Out (UK), 2016. Used
CD...$8.99
A great little project – Clara Moreno's jazzy soul take on Jorge Ben's classic Samba Esquema Novo album – but much more than a simple tribute record, and some of her warmest grooves in years! The songs by Jorge are great, of course – but Clara is really doing something special ... CD

Imprensa Cantada
Trama/Ultra Pop, 2003. Used
CD...$14.99
A mad return to form for Tom Ze – the legendary Brazilian musician who's been one of the few artists to keep the flag of Tropicalia flying over the years! The set features Tom in a number of styles – rocky, quirky, folksy, electric, and always with that mad sense of humor that makes ... CD

Stone Flower (remastered edition – with bonus track)
CTI, 1970. Used
CD...$8.99
One of Antonio Carlos Jobim's greatest records – and a perfect blend of his subtle bossa genius with the moody electric sound of CTI! Jobim plays electric and acoustic piano, guitar, and sings a bit – and Deodato handled the arrangements with a breezy brilliance that matches all the ... CD