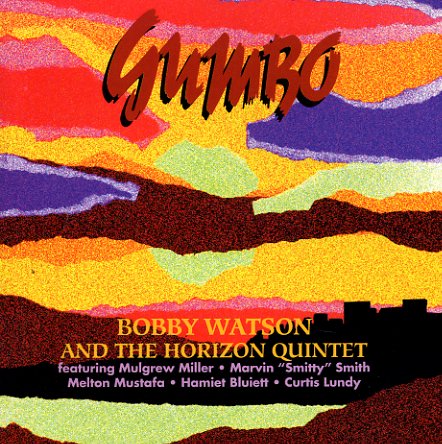 Early work from alto genius Bobby Watson – recording here with the Horizon Quintet, a hip group of spiritual soul jazz players that includes Curtis Lundy, Mulgrew Miller, Hamiet Bluiett, and Marvin Smitty Smith. The session takes up the soul jazz torch of 70s work by artists like Woody Shaw, Clifford Jordan, and Cedar Walton – with a mix of modal structures in the rhythms, augmented by searching solos, and just the right amount of hardbop energy. Tracks are mostly all long originals – and titles include "Premonition", "Wheel Within A Wheel", "From East To West", and "Point The Finger".  © 1996-2022, Dusty Groove, Inc.

Appointment In Milano
Red (Italy), 1985. Used
CD...$12.99
A tremendous little record from Bobby Watson – one of the brightest young artists in jazz back in the 80s! The album features Watson grooving with the Italian Open Form Trio for the session – but all players come together with the cohesiveness of some of Watson's best work with Curtis ... CD

No Question About It
Blue Note, 1988. Used
CD...$9.99
Features Roy Hargrove on trumpet, Frank Lacy on trombone, John Hicks on piano, Curtis Lundy on bass, and either Victor Lewis or Kenny Washington on drums. CD

Left Alone '86
Evidence, 1986. Used
CD...$8.99
Not a duet session as you might guess from the title – as the piano of Mal Waldron and alto of Jackie McLean are joined by the bass of Herbie Lewis and drums of Eddie Moore! Titles include "Lover Man", "Minor Pulsation", "Left Alone", "Cat Walk", and ... CD

True Or False
Evidence, 1986. Used
CD...$6.99
Crackling tight work from Roy Haynes – recorded here in a live setting with his mid 80s group that featured the great Ralph Moore on tenor. Moore's angular lines dominate the set – a bit freer than on the albums cut under his own name, driven onward by the drumming of Haynes, into a ... CD