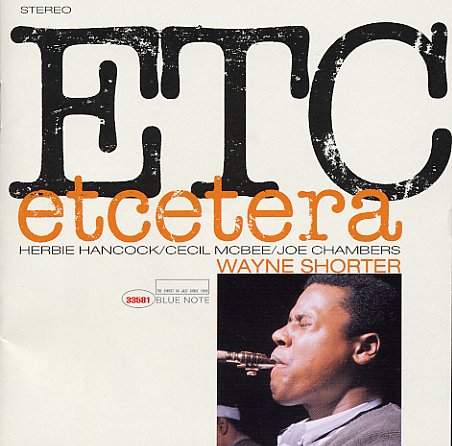 Don't let the title fool you, as the album's hardly an "etcetera" – not some run-on work from Wayne Shorter, but a real lost cooker from his 60s Blue Note years! The record's got a very sharp-edged quartet sound – a bit modern and edgey at times, with sharp tenor lines from Shorter, piano from Herbie Hancock, bass from Cecil McBee, and drums from Joe Chambers. Wayne recorded the date in 1965, but the material wasn't issued by Blue Note until 15 years later – a delay that somehow made the whole thing even more of a gem, especially at a time when Shorter wasn't blowing this strongly on record. Tracks include four originals "Toy Tune", "Penelope", "Etcetera", and "Barracudas" – plus the Gil Evans number "Barracudas (General Assembly)".  © 1996-2023, Dusty Groove, Inc.
(1995 Connoisseur pressing.)

Adam's Apple (RVG remaster edition)
Blue Note, 1966. Used
CD...$8.99
An incredible album – one of our favorite Blue Notes ever! Despite the fact that the album's a spare quartet session, the record is one of Wayne Shorter's richest – and features his gutsy young tenor soloing insanely with a rhythmically intense combo that includes Herbie Hancock on ... CD

Ju Ju (RVG remaster edition)
Blue Note, 1964. Used
CD...$6.99
Genius, pure genius! Like all of Wayne Shorter's Blue Note sessions from the mid 60s, this album's a beautiful blend of hard bop ideas with a modern spiritual soulful consciousness – as important in its own way as Coltrane's work of the time – an incredible precursor for sounds from ... CD