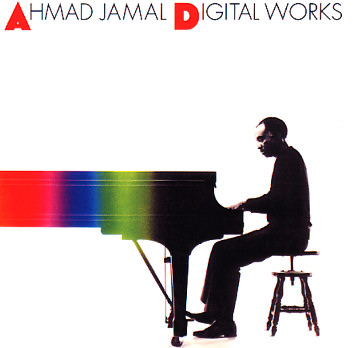 A cheesy cover, but a pretty decent little record – not nearly as electric or dated as you might guess from the image on the front or the title! The premise is simple – as Ahmad's updating a number of the bigger tunes from his book of the 50s – not in terms of instrumentation, but through recording techniques – using the then-new digital format to get a supposedly cleaner sound and bolder tone out of his piano. Fortunately, there's little in the way of showing recording techniques to date the record – and although "digital", the sound of the record is never stiff or cold – and Jamal's performance is strong enough to make the whole thing sparkle, even if it was recorded with a paper cup and string! Titles include "Wave", "Poinciana", "But Not For Me", "Midnight Sun", "Footprints", and "One".  © 1996-2022, Dusty Groove, Inc.
(Out of print first pressing.)

Legendary Okeh & Epic Recordings (Piano Scene Of Ahmad Jamal/Ahmad Jamal Trio)
Epic/Legacy (UK), Early/Mid 50s. Used
CD...$6.99 (CD...$5.99)
The long-overdue reissue of some of Ahmad Jamal's first recordings – early sides for the Okeh and Columbia labels, all tunes that would go on to have a huge influence on the use of the piano in jazz! All tracks on the set were recorded in the early 50s with Jamal's great drumless trio that ... CD