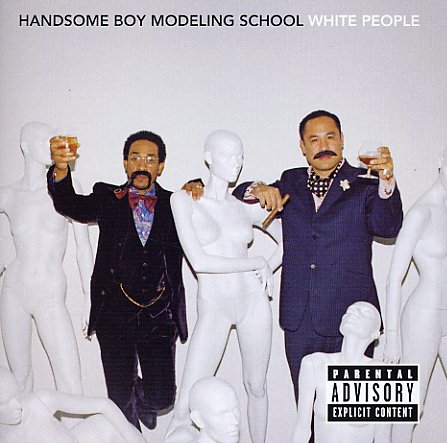 Just when you thought Prince Paul and Cat Power would never make a record together PRESTO – it's the new Handsome Boy album! HBMS takes a bit more of a chillout tack with this long overdue second opus – with lots of laidback beats and samples, and a surprising amount of live instrumentation! The gleeful, sarcastic comedy of the stellar first album remains intact, with some genuinely amusing skits (including one with Jay Z appearing under the pseudonym Hines Buchanan), and the deep range of guest vocalists isn't as surprising as how strong their work is in the best tunes. It would have been pretty easy for Prince Paul and Automator to find a bunch of interesting names to flesh out their big pop culture frappe, but something else altogether to make trippy hip hop tracks featuring Cat Power and the Hieroglyphics make sense on the same record. A pretty solid set from the most adventurous pseudo duo in the game! Guests include Del The Funky Homosapien, De La Soul, RZA, Lord Finesse, AG, Rahzel, Jazzy Jay, Qbert, Mike Patton, Casual, Hieroglyphics, Grand Wizard Theodore, El-P, John Oates, Pharrell, Kid Koala, and George W. Bush (just kidding). Tracks include "If It Wasn't For You" with De La, "Are You Down With It" with Mike Patton, "The World's Gone Mad" with Del and others, "It's Like That" with Casual, "I've Been Thinking" with Cat Power, "Rock And Roll (Could Never Hip Hop Like This) Pt 2" featuring Lord Finesse, Qbert and others, First. . .And Then" featuring Dres from Black Ship, "A Day In The Life" featuring RZA, AZ and others and more, plus intro/outro by Father Guido Sarducci.  © 1996-2021, Dusty Groove, Inc.
(Clean version. Barcode has a cutout hole and booklet has a gold promo stamp.)

St Elsewhere (deluxe edition with CD, DVD & book)
Atlantic/Downtown, 2006. Used CD & DVD
CD...$4.99
A synthy soul funk project from the team of Danger Mouse and Cee-Lo – a set that's just trippy enough – and it's possibly the best full length from either party, ever! You don't need us to tell you that DM has had a finger in a handful of the best fringe pop/leftfield hip hop projects ... CD