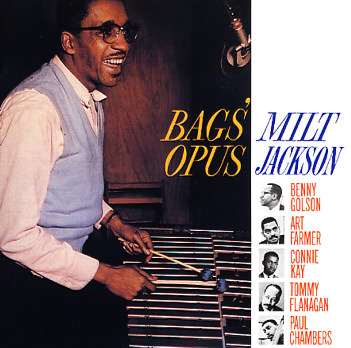 One of the greatest Milt Jackson albums ever – thanks to an incredible lineup that features Art Farmer on trumpet and Benny Golson on tenor – both of whom give the record a lot more edge than usual for Jackson! The set's almost a maturation of the earliest modern grooves that Milt forged in his earlier sessions for Blue Note and Prestige – a sound that comes across here with a lot more confidence and focus than some of his 50s Savoy sides – with a sharper, edgier quality that comes from Golson's great arrangements for the record. Milt's vibes have a really chromatic feel here, and a sound that's almost louder than usual – and the rest of the group features Tommy Flanagan on piano, Paul Chambers on bass, and Connie Kay on drums. Titles include "Blues For Diahann", "I Remember Clifford", "Thinking Of You", and "Whisper Not".  © 1996-2021, Dusty Groove, Inc.
(Mono black label pressing. Cover has some ring & edge wear, splitting in the top seam, and split bottom seam.)

Coltrane Time (Douglas Collection)
United Artists, 1958. Very Good+
LP...$14.99
This is a repackaged version of an album that was originally issued under Cecil Taylor's name, under the title Hard Drive (and later Stereo Drive, or something like that). The record brings together two of the late 50's most promising modernists – Cecil Taylor and John Coltrane – in a ... LP, Vinyl record album

Jazz Combo From I Want To Live!
United Artists, 1958. Very Good
LP...$4.99
This is the small combo recording of tracks from the legendary jazz score to I Want To Live! Although not featured that prominently in the film, the band of Gerry Mulligan, Art Farmer, Bud Shank, and others were a pretty tight little group – even though it was strange to see this west coast ... LP, Vinyl record album