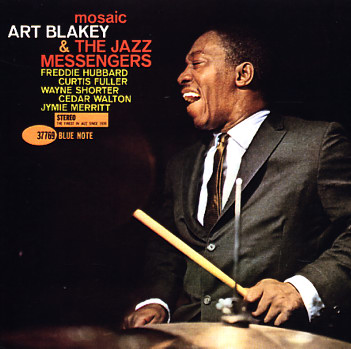 An explosive session from an expanded edition of the Jazz Messengers – recorded at a key point when Art Blakey moved the group up to six members instead of five! Although bigger than the group on most Jazz Messenger Blue Notes, the sextet have an energy that's almost tighter – a sense of poise, focus, and vision that's not just driven by Blakey's drum kit alone – but by the kind of unique magic that only happens during rare groupings in classic jazz. A key part of the energy here comes from pianist Cedar Walton – who's replacing the Bobby Timmons soul jazz mode with a sound that's a bit more expansive and visionary. But equally important is the three horn lineup of Freddie Hubbard on trumpet, Curtis Fuller on trombone, and Wayne Shorter on tenor – a two-brass frontline that's used far differently than other groups – bold one minute, but personal and sensitive the next. There's a mixture of warmth and driving energy here that's simply incredible – a prime example of Blakey taking things to the next level, when it would have been easy enough for him to sit on his laurels and keep doing the same thing over and over again! Includes classic readings of Cedar Walton's "Mosaic", Freddie Hubbard's "Crisis", and Curtis Fuller's "Arabia" – as well as Shorter's excellent "Children Of The Night".  © 1996-2021, Dusty Groove, Inc.
(Out of print.)