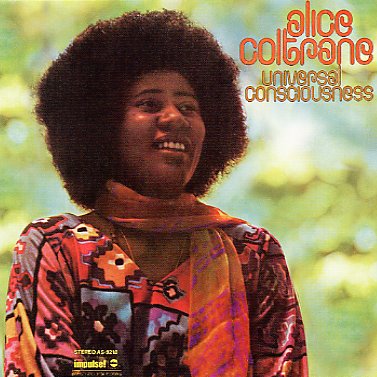 One of Alice Coltrane's most adventurous albums – a beautiful blend of organ, harp, percussion, and strings – much of which are transcribed for the album by Ornette Coleman! The most haunting aspect of the album is Alice's work on organ – spare, jagged, with a nascent soulful quality that's quite different from her piano work on other Impulse albums. The strings provide a sheet of sound – a shimmering backdrop to support Alice's work on the keys – moving forward tentatively, but growing in energy as the album progresses through a host of Eastern spiritual influences. Alice is way past jazz at this point – moving towards the new level of consciousness hinted at in the title, growing majestically on tracks that include "Oh Allah", "Sita Ram", "Hare Krishna", "Universal Consciousness", and "The Ankh of Amen-Ra".  © 1996-2023, Dusty Groove, Inc.
(Out of print, includes domestic obi.)

World Spirituality Classics Vol 1 – The Ecstatic Music Of Alice Coltrane Turiyasangitananda
Luaka Bop, Mid 80s. Used
CD...$7.99
An incredible side of the talents of the legendary Alice Coltrane – obscure 80s material that was recorded in the years after her famous records on Impulse and Warner Brothers – only ever issued on cassette at the time! The tracks have Alice still very much in the same spiritual ... CD

Getz Au Go Go
Verve (Germany), 1964. Used
CD...$3.99 (CD...$4.99)
A beautiful dreamy album that's quite different from the classic Getz/Gilberto collaboration – but which also shares much of that set's lyrical beauty! This album was recorded live, in 1964, when Stan Getz was playing with his quartet that included Gary Burton on vibes – an incredible ... CD