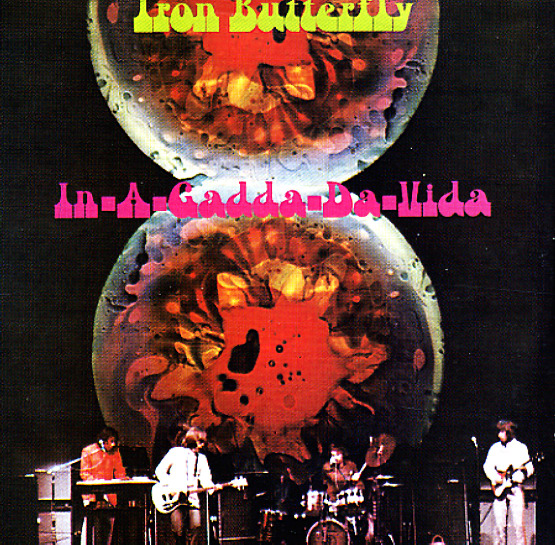 Also available
Iron Butterfly — In-A-Gadda-Da-Vida ... LP 14.99
The album that rocked a million dorm rooms back in the 60s – and for good reason, too – given that the title track is a side-long, totally jamming monster – the kind of track that was really revolutionary at the time, and which still has a hell of an impact all these many years later! "In A Gadda Da Vida" was shortened to a single – with the big hook intact – but this classic album version runs for 17 minutes in length, and has the group doing all these cool jams with their instruments – all the animals in the garden of Eden talking to each other (or at least that's what our addled teenaged minds always thought!) Shorter tracks are mighty nice too – a heady, heavy brew of Hammond and fierce guitar from Erik Brann, on cuts all penned by group leader Doug Ingle. Titles include "Termination", "My Mirage", "Flowers & Roses", and "Most Anything You Want" – plus live and single versions of the title track.  © 1996-2023, Dusty Groove, Inc.

Amplified Heart
Atlantic, 1994. Used
CD...$1.99
A later masterpiece from the duo of Tracey Thorn and Ben Watt – maybe their strongest record since their early years – and a great way of allowing their always-strong songwriting a chance to find a new sort of groove! In this case, the music is both a step back to the more acoustic ... CD

Houses Of The Holy (with bonus disc)
Atlantic, 1973. Used 2CD
CD...$19.99
Led Zeppelin at peak power – mixing hard rock bombast with deep, genuine love for blues and folk guitars! Houses Of The Holy is the essential the blueprint for countless imitators to come – but it's also got smarts, subtleties and creative ambitious that's just plain lost on the ... CD

Led Zeppelin IV
Atlantic, 1971. Used
CD...$4.99 (LP...$29.99)
Hard rock perfected! It's around Led Zeppelin IV that you can easily say that the group moved up from being incredibly great to flat-out legendary – really in a class by themselves, although maybe they'd already reached that point with the sublime sounds of the previous three records! There' ... CD