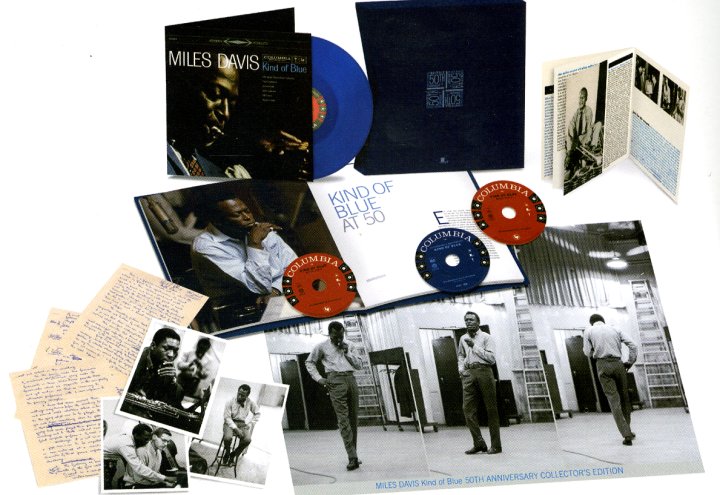 A massive package that's a stunning tribute to Kind Of Blue – served up in one of the most comprehensive album reissues we've ever seen! The core record is the ultimate Miles Davis album – the one that includes so many songs that we've heard way too much in Starbucks, in retail stores, or at a friend's house who claims to be a "jazz expert", but is really a yuppie dilettante. Yet somehow, over all the years, and all those playings, the record manages to still sound fantastic – a truly inspirational piece of music that's long deserved all the attention it gets! The legendary group on the album includes John Coltrane on tenor, Cannonball Adderley on alto, Bill Evans on piano, and Paul Chambers on bass – working with Miles in a relatively modal style, with brilliant rhythm changes and a wonderful sense of space. The whole thing's sublime – and titles include "Blue In Green", "All Blues", "So What", and "Freddie Freeloader". Yet the reissue package takes things even further – with a high-quality vinyl version of the album, and 2CDs worth of music, with 21 tracks in all – including some alternate takes and rare studio bits too! The whole thing comes with a beautiful booklet, filled with photos and other inserts – and there's also a DVD too – one that features the 81 minute film "Celebrating A Masterpiece – Kind Of Blue".  © 1996-2022, Dusty Groove, Inc.
(Includes all extras except the poster. Vinyl is VG+ condition. Box has light wear.)