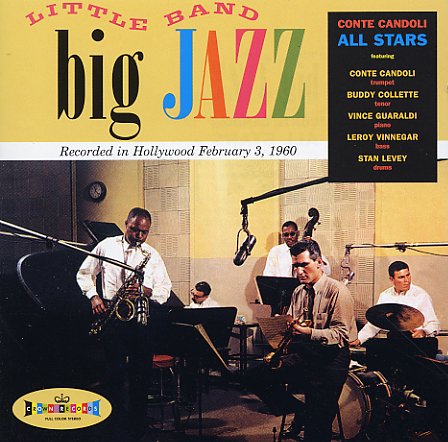 An incredible record – and the kind of rare LA bop session that got totally lost because it was never packaged properly! This obscure set was issued by the Crown label under a number of names – both the Conte Candoli All Stars and Vince Guaraldi – and the group includes Conte Candoli, Buddy Collette, Vince Guaraldi, Leroy Vinnegar, and Stan Levey – all playing with a fantastically tight and incredibly soulful bop groove, of the sort you always hear them credited for, but which you can never find on any of their snoozy more famous records. Vince Guaraldi plays some incredibly soulful piano, in a manner that's very different than his Fantasy recordings – and he's playing here with a killer group of LA players who deliver some of their finest recorded work! Trust us, the session's a gem – and it's one of those you can put on and surprise your friends, and yourself! Tracks include "Muggin The Minor", "Mambo Diane", "Macedonia", and "Little David".  © 1996-2021, Dusty Groove, Inc.
(Stereo gray label pressing. Cover has light wear, a split bottom and a center split on the spine.)

Latin Contrasts (aka Brazilliance Vol 3)
World Pacific, 1958. Very Good
LP...$16.99
5 years after they made their first set of groundbreaking Braziliany jazz tracks together, Bud Shank and Laurindo Almeida went back into the studio to record another great batch for Pacific Jazz. That second set of sessions is captured here in its entirety, and it features Shank and Almeida ... LP, Vinyl record album

Jazz Junction (Soul Junction/All Morning Long)
Prestige, 1957. Very Good 2LP Gatefold
LP...$8.99
One of those 70s two-fers where Prestige went back and decided dicing up all those sessions in the 50s and 60s didn't make as much sense as issuing them as the way they went down. As such, this set collects work from one long blowing session, which eventually saw the light of day as two separate ... LP, Vinyl record album