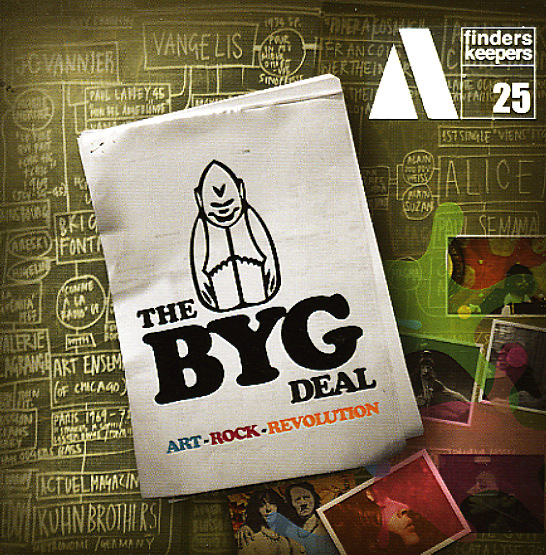 A far reaching collection of funk rock, experimental pop, jazz, psychedelia and spacey grooves from France's BYG label, compiled by the global underground purveyors at Finders Keepers – late 60s and early 70s material from Gong, Art Ensemble Of Chicago, Alice, Brigitte Fontaine and Areski and many more! The the cultural fabric in flux after the '68 student riots, BYG put out some really tremendous and stylistically sprawling music, from free jazz laced with funk, to gritty French pop and rock and so much more. This set from Finders Keepers pulls together some real gems, and the liner notes provide some essential knowledge. A surefire keeper from Finders Keepers! 22 tracks in all: "Que Pouvons-Nous Faire Ensemble" by Alice, "L'Automne" by Francois Wertheimer, "Ca Va Faire Un Hit" by Brigitte Fontaine and Areski, "Mademoiselle Marie" by Coeur Magique, "Astral Abuse" by Alpha Beta, "Rock Out" by Art Ensemble Of Chicago, "Stuffed Tomato" by Vangelis, "Bloody Rockers" by Joachim and Rolf Kuhn, "Mother Long Shanks (Oh Mother I Am Your Fantasy)" by Gong and more.  © 1996-2021, Dusty Groove, Inc.

Well Hung – Funk Rock Eruptions From Beneath Communist Hungary
Finders Keepers/B- Music, Late 60s/1970s. New Copy
CD...$6.99 16.98
An amazing collection of funky work from Communist Hungary – music that's really making us change our opinion about the Cold War! Back in the day, we used to think the Iron Curtain was in place to keep out Western forces – but now we know it was there to keep in groovy music like this ... CD