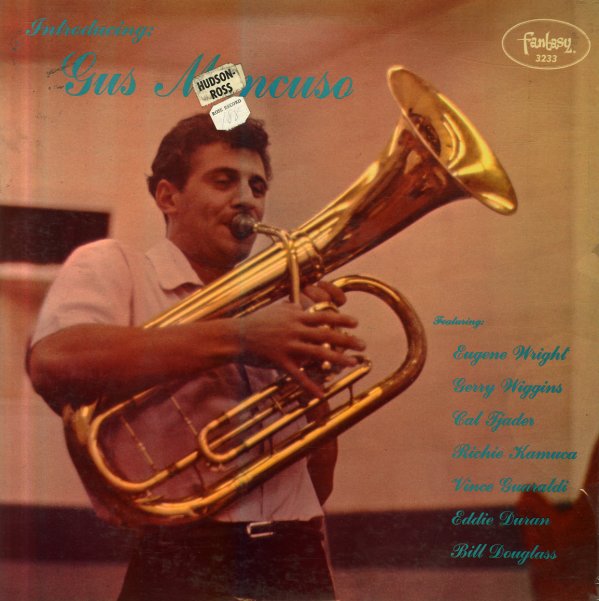 Gus Mancuso was a 50s instrumentalist who made a brief but strong flash on the modern scene – playing one of the most unlikely jazz instruments ever, a euphonium, which he handled with surprising dexterity and grace, creating a bass-heavy sound that was not unlike some of the work done on baritone during the decade. This set features Mancuso working with Vince Guaraldi on piano, Richie Kamuca on tenor, Cal Tjader on vibes, and Eddie Duran on guitar – on titles that include "The Ruble & The Yen", "By The Way", "A Hatful Of Dandruff", and "And Baby Makes Three".  © 1996-2022, Dusty Groove, Inc.
(80s Spanish pressing.)

Modern Music From Philadelphia
Fantasy, Mid 50s. Very Good+
LP...$29.99
Incredible jazz material from one of the least-known and least-appreciated groups working on the east coast during the 50s. Dennis and Adolphe Sandole had an incredible talent for writing – and in the short time they recorded together, they served up some amazing tracks with a wonderful ... LP, Vinyl record album

Tokyo Concert
Fantasy, 1973. Very Good+
LP...$29.99
A great live date from Bill Evans – one of his essential sides of the 70s, even if you've already got a bunch of other Evans live material! We know what you're thinking: "Do I have this one? Seems to be a lot of tunes here that I've got on other Evans recordings." But take it ... LP, Vinyl record album

Herd At Montreux
Fantasy, 1974. Sealed
LP...$9.99
Funky Woody caught live at Montreux – a really wonderful set that follows strongly from his tight grooves of the Cadet years, and which is easily one of his best for Fantasy! Despite the live setting, the group are every bit as tight as they were in the studio during these years – ... LP, Vinyl record album

One Flight Up
Blue Note, 1964. Very Good+
LP...$44.99
An unusual set for both Dexter and Blue Note – first, because the set was recorded in Europe (not at Rudy Van Gelder's), and second because the tracks are all quite long! The album was recorded in Paris – and is cut in an open-ended format that's very much in the mode that Gordon would ... LP, Vinyl record album