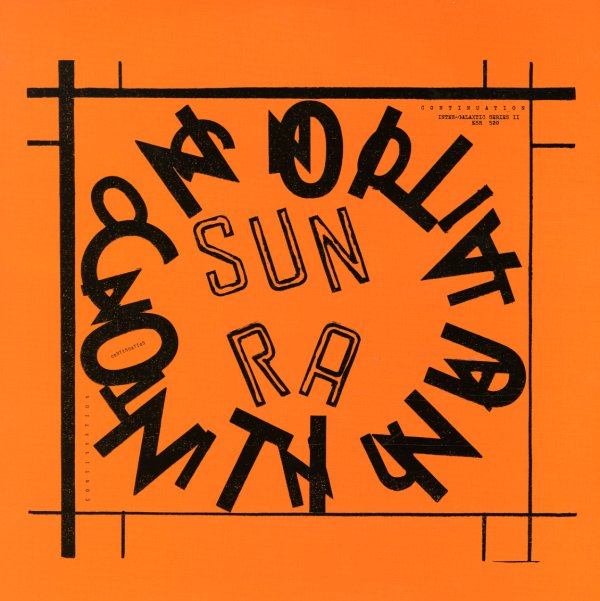 Mindblowing music from Sun Ra & The Arkestra – sounds recorded during the same marathon session that gave the world the records Other Planes Of There, When Sun Comes Out, and When Angels Speak Of Love – but titles that are much more obscure overall! The initial release of the material featured very misleading notes, but the true details of the session are even more impressive – as Ra plays a variety of unusual instruments alongside piano – including the piano strings, space organ, and clavioline – alongside some sublime straight horn work from John Gilmore on tenor, Marshall Allen on alto and oboe, Pat Patrick on baritone, Danny Davis on alto and clarinet, Walter Miller on trumpet, Robert Cummings on bass clarinet, and Ali Hasaan on trombone! The lineup here has that raw power the Arkestra first unleashed after their initial move to New York – almost a sense of new freedom in the new environment – even at a time when they weren't clicking on a financial level, but still continued to push forward with new ideas in music! Some passages have this great approach that links the cosmic ideas of the Arkestra with older traditions of jazz soloing – while others reflect the growing concern of the group with new textures and sounds – making for some very impressive elements on both the horns and percussion. The group is completed by Ronnie Boykins on bass, Art Jenkins on space voice and percussion, and Tommy Hunter on drums, percussion, and some mighty nice reverb – and titles include "Biosphere Blues", "Intergalactic Research", "Earth Primitive Earth", "New Planet", and "Continuation To Jupiter Festival". Beautiful 2CD reissue features sublime sounds from the original tapes, remastered – plus a full bonus CD of unreleased tracks that include "Blue York", "Conversation Of The Universe", "Red Planet Mars", "Cosmic Rays/Next Stop Mars", "The Myth", "Meteor Shower", "Infinity", "The Beginning Of", and "Endlessness".  © 1996-2023, Dusty Groove, Inc.

Omniverse (with bonus tracks)
Saturn/Modern Harmonic, 1979. New Copy
CD...$13.99 16.99
A really great record, and one that was recorded by a smaller version of the Arkestra than usual – done in this spiritual style that's almost a bit like some of the Horo Records material that Sun Ra had recorded just a short time before! There's an intimacy here that's wonderful – and ... CD