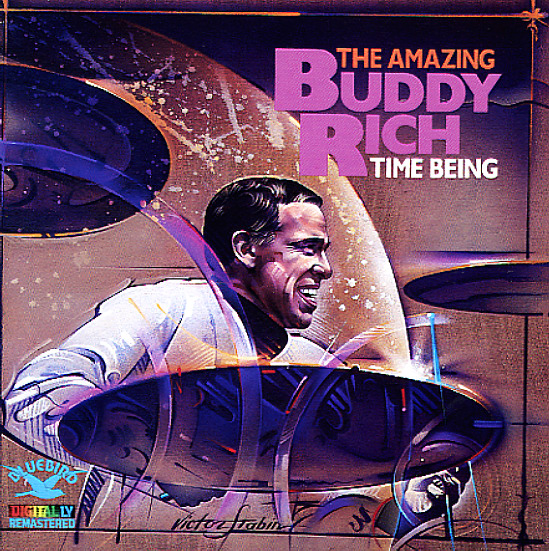 Playtime (with bonus tracks)
Fresh Sound, 1960. Used 2 CDs
CD...$11.99
An obscure early 60s date from Buddy Rich – recorded with a very unusual group of musicians! The cover bills the group as Buddy Rich & His Buddies – a hip little combo that features some strong Chicago players, most of whom went onto greater fame, and who make the record an ... CD

Rich In London – Live At Ronnie Scott's (plus bonus tracks)
RCA/Mosaic, 1971. Used
CD...$11.99
Crackling live energy from Buddy Rich – recorded at Ronnie Scott's nightclub in London, and with a sound that recalls some of Buddy's best from the 60s! The group is plenty great – and the attraction here goes way beyond just Buddy's famous work as a leader. As with other Rich albums ... CD

This One's For Basie
Verve, 1956. Used
CD...$4.99
A lively little set done strongly in a Basie mode – as you might guess from the title! Buddy's on drums, but the real maestro here is Marty Paich – who handled the arrangements, and most likely brought together the batch of west coast jazzers who inhabit the group – including ... CD

Desmond Blue (First Editions Series)
RCA/BMG, 1962. Used
CD...$4.99
A cool jazz classic from altoist Paul Desmond and guitarist Jim Hall! The album was recorded under Desmond's name, but Hall's the guitarist throughout, and his playing lends an indescribably wonderful edge to the set, making the album a real team effort! Unlike other RCA sides by Hall and Desmond ... CD