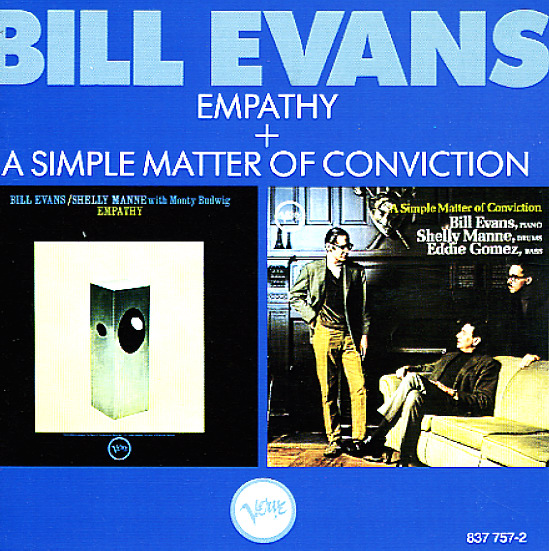 A pair of great Bill Evans albums for Verve – both a very good fit together! The cover of Empathy co-credits Bill Evans and Shelly Manne as the leader of the set – and that distinction's an important one – as the record has a slightly different feel than some of Bill's other 60s work for Verve! The sound is often a bit stronger, somewhat bolder – and although Manne's not a monster on the drums, he does have a way of directing the tunes that's a bit different than some of Evans' other piano-led albums. Bass is by Monty Budwig, who's nicely sensitive to the talents of both players – and there's almost an equally-weighted melodic feel to all three elements of the trio – which really rounds out the record nicely. Titles include "The Washington Twist", "Danny Boy", "Let's Go Back To The Waltz", "With A Song In My Heart", "Goodbye", and "I Believe In You". Simple Matter Of Conviction is a move into a more sophisticated vein than his earlier recordings! The album has him working with bassist Eddie Gomez, a hugely talented bassist that would be one of Bill's best partners during this period, and a player who added a nice dose of soul to the proceedings. The drummer is Shelly Manne, who's pretty nice, too – and really shows off some of his more sophisticated shadings here in the presence of Evans and Gomez – similar to his work on the great Empathy album. Tracks are shortish, but filled with imagination – and titles include "Unless It's You", "These Things Called Changes", "Stella By Starlight", and "A Simple Matter Of Conviction".  © 1996-2020, Dusty Groove, Inc.