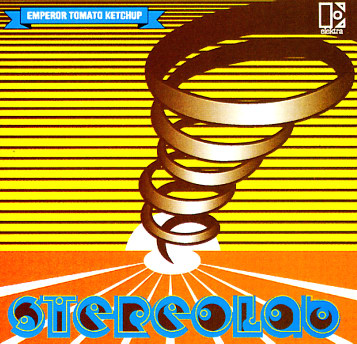 Stereolab's third album for Elektra – continuing their wonderful brand of space age pop in the 90s, and still some of the most exciting music to come from a major label at the time! Many would argue that Emperor Tomato Ketchup is the band's finest moment, and for good reason. The bubbling tunefulness at play, from beginning to end, is as insistent as just about anything in their canon – but it also got a deeply layered and ultimately pretty diverse sound. Brilliant to this day! Titles include "Spark Plug", "Les Yper Sound", "Tomorrow Is Already Here", "Metronomic Underground", "Cybele's Reverie", "Anonymous Collective", and "Slow Fast Hazel".  © 1996-2021, Dusty Groove, Inc.

Absolutely Live!
Elektra, 1970. Used
CD...$4.99
An incredible record – with a great performance, and the ultra-creepy long version of "Celebration Of The Lizard"! CD

Marquee Moon
Elektra, 1977. Used
CD...$6.99
The masterful debut of Television! Marquee Moon is indisputably one of best records to come out of late 70s NYC . It's truly a singular achievement – one of the few records that seems to be on every rock literati's list of the all-time-bests – and actually deserves every bit of praise ... CD

Original Lost Elektra Sessions
Elektra, Late 60s/Early 70s. Used
CD...$7.99 (CD...$10.99)
Massive lost work from the Butterfield Blues Band – recorded in 1964, quite early in the group's career – but a set that already has them hitting hard with a really powerful sound! The recording quality and overall sound is nice and rough – a gritty groove that's more closely ... CD