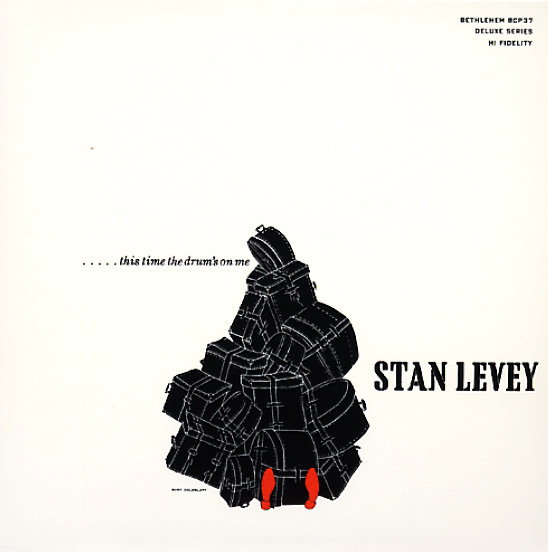 A nice little bit of bop from LA – a tightly-crafted mid 50s date for the Bethlehem label – featuring drummer Stan Levey at the head of a great group of horn players! The album features some standout work from Dexter Gordon on tenor – making a rare appearance here as a sideman – and the frontline of the sextet also features Conte Candoli on trumpet and Frank Rosolino on trombone – both well-matched players, especially at this point in their careers. The group's completed by Leroy Vinnegar on bass and Lou Levy on piano – and there's a bit more bite on some tracks than the usual Bethlehem set. Titles include "Diggin For Diz", "Ruby My Dear", "Tune Up", "Stanley The Steamer", and "This Time The Drum's On Me".  © 1996-2022, Dusty Groove, Inc.
(2001 Avenue Jazz pressing.)

Joe Roland
Bethlehem, 1956. Used
CD...$4.99
A sweet little session with great mellow sound – and one of the few records ever cut by vibist Joe Roland! Once upon a time, we might have said Joe Roland a bit too soft for us – but this 1956 Bethlehem session has him playing in the company of a hip group that includes Freddie Redd on ... CD

Stu Williamson
Bethlehem/Solid (Japan), 1956. Used
CD...$11.99
A really sparkling session from trumpeter Stu Williamson – one of a few great records he cut for the Bethlehem label in the 50s, and a set that's one of the cookingest from the company at the time! Stu's trumpet lines are already mighty nice – tight, and often a bit bolder than others ... CD

Complete Charlie Shavers With Maxine Sullivan
Bethlehem/Avenue, Mid 50s. Used
CD...$3.99
An unusual slice of work by trumpeter Charlie Shavers – proof of his vitality and the range of his powers during the 50s! The first 4 tracks feature Shavers in a sextet with Hank D'Amico, Bennie Morton, Ken Kersey, Aaron Bell and Panama Francis, and some narration by Al Jazzbo Collins! ... CD

Chase Is On (Japanese paper sleeve edition)
Bethlehem (Japan), 1957. Used
CD...$19.99 24.99
A killer – and one of the greatest records ever cut on Bethlehem! Charlie Rouse and Paul Quinichette go head to head in a hard-blown session that's very different than most of the work on Bethlehem – grooving in a free-wheeling "chase" mode, as you might guess from the title ... CD