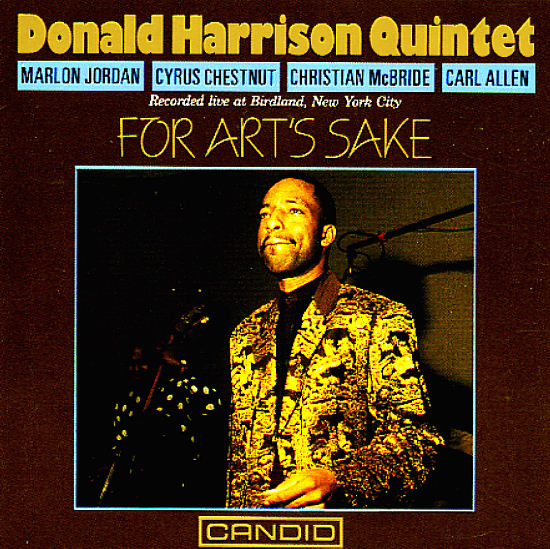 Features Harrison on alto, Marlon Jordan on trumpet, Cyrus Chestnut on piano, Christian McBride on bass, and Carl Allen on drums. Tracks include "So What", "Nut", "Softly, As In A Morning Sunrise", "In A Sentimental Mood", and the original and title track, "For Art's Sake".  © 1996-2020, Dusty Groove, Inc.
(Out of print, booklet has a cut corner.)

World Of Cecil Taylor
Candid (UK), 1960. Used
CD...$8.99
Cecil Taylor's first LP for the Candid label – and a landmark album that really lets him open up for the first time in years at a recording session! The album was cut at Nola's Penthouse in 1960, and the core group is Cecil's trio with Buell Neidlinger on bass and Dennis Charles on drums ... CD

Jumpin' Punkins
Candid (Germany), 1961. Used
CD...$9.99
Pretty well peak era material from pianist Cecil Taylor – doing his thing with incredible line up of jazz greats on a couple NYC dates from early 1961! A couple of the pieces here are pure magic – we're especially loving the bits where Cecil is kind of hitting the keys heavily, ... CD

We Insist! – Freedom Now Suite
Candid (Germany), 1960. Used
CD...$8.99 (LP...$11.99)
One of the most righteous albums that Max Roach ever cut – and a monumental jazz release from the heart of the Civil Rights era! As you can guess from the cover and title, there's a very political bent to the record – served up in righteous lyrics penned by Oscar Brand Jr, and sung by ... CD

Candid Dolphy
Candid (UK), 1960. Used
CD...$6.99
A collection of work that Eric Dolphy cut for the Candid label in 1960 – most of it under the name of other leaders, pulled from a variety of records, and remastered here to make a strong collection of tracks that documents this semi-lost chapter of Dolphy's career. Given the strength of the ... CD

Rights Of Swing
Candid (UK), 1961. Used
CD...$8.99
Really compelling large group work from Phil Woods – one of his first-ever efforts of its type, and a tremendous session that's filled with solos from a wide array of very hip players! The whole album's built around a 5-part "Rights Of Swing" work penned by Woods – a jazz ... CD

Air
Candid (Germany), 1960. Used
CD...$9.99
Cecil Taylor and Archie Shepp – two key modern figures of the 60s, working here together in a seminal session recorded at the start of the decade! The album's approach is definitely dictated by Taylor – as the tunes have a piano-driven quality that's quite different than most music ... CD