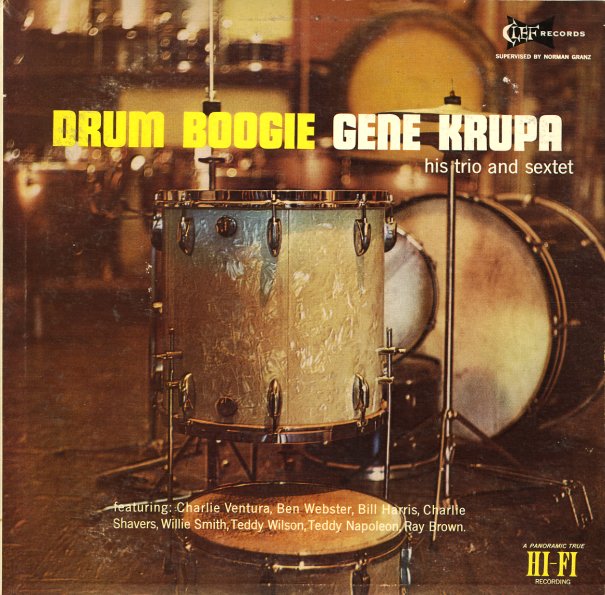 A great little record that features Krupa in two modes – trio and sextet. The trio sides feature Teddy Napoleon on piano and Charlie Ventura on tenor and baritone on tracks that include "Stardust", "Perdido", "Drum Boogie", and "Fine's Idea" – and without a bass, there's a bit more freedom in the sound of these tunes than you might expect. The other two tracks on the set – "Capital Idea" and "Paradise" – feature a sextet with Charlie Shavers on trumpet, Teddy Wilson on piano, and Willie Smith on alto sax, and as with the rare bits of Smith's work from the time, his work on alto is worth the price of the album alone!  © 1996-2022, Dusty Groove, Inc.
(Mono MGM pressing. Cover has light wear and aging, with a small sticker spot and ink stamp in back.)

Percussion King
Verve, 1961. Near Mint-
LP...$14.99
Gene Krupa's definitely the percussion king here – working on a lot of additional percussion with help from Joe Venuto, Doug Allen, and Mousey Alexander – under the direction of George Williams, who arranged all sorts of unusual material for the session! LP, Vinyl record album

Gene Krupa Quartet
Clef, Early 50s. Very Good
LP...$36.99 43.99
The drummin' man leads a quartet that includes Bobby Scott on piano, John Drew on bass, and the amazing (and amazingly underrecorded) Eddie Shu on tenor. Shu's playing is great, and the longish tracks on the album give the whole group lots of room to open up. Titles include "All Of Me", ... LP, Vinyl record album

Count Basie Swings, Joe Williams Sings
Clef, 1955. Near Mint-
LP...$11.99
Count Basie plays the piano and Joe Williams sings in his bluesy way and they are backed by a slew of musicians who include Thad Jones on trumpet, Ben Powell on trombone, Frank Foster on tenor saxophone, Sonny Payne on drums and many, many others. Frank Foster did all of the arrangements and the ... LP, Vinyl record album