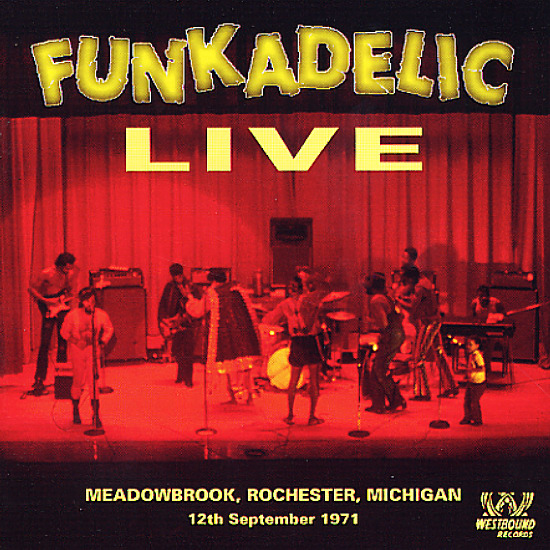 An insane treat for any fan of the early years of the P-Funk empire – that time when George Clinton and crew were taking in plenty of trippy influences from the heady Detroit scene of the time – and fusing it all into their own really unique blend of soul! The set features the group playing live, in relatively familiar territory of Michigan – crafting these grooves that are filled with as much fuzz as funk, and really working as an incredible live representation of all the mad genius they brought to their first few studio albums for Westbound! The whole thing's very well-recorded – as strong a live album as any label would have issued at the time – and titles include very long versions of "Maggot Brain" and "All Your Goodies Are Gone", both a fast and slow take of "I Call My Baby Pussycat" – and the tracks "Alice In My Fantasies", "I Got A Thing You Got A Thing Everybody Got A Thing", "I'll Bet You", "You & Your Folks Me & My Folks", and "Good Old Music".  © 1996-2021, Dusty Groove, Inc.
(With a new cover image.)

Closer Than Close – The Best Of Jean Carne
Philadelphia International, Late 70s/Early 80s. Used
CD...$6.99
One of the nicer things about the global centralization of culture into the hands of a few giant companies is that you can at least get a "greatest hits" comp like this which spans the artists career on a number of different labels! As proof, you'll find killer stuff from Jean's best ... CD

Betty Wright – The Movie
S Curve, 2011. Used
CD...$4.99
Amazing, simply amazing – and a record that's way more than we were expecting! The Roots team up here with legendary Miami soul singer Betty Wright – in music that comes from a film project, but which really stands up brilliantly on its own – as a record that may well be Betty's ... CD