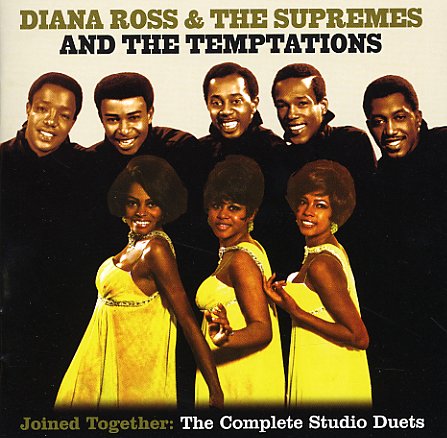 Joined Together – The Complete Studio Duets

A great lost slice of late 60s Motown – the recordings made by The Supremes and The Temptations together – a marvelous pairing of two of the label's finest groups, in a style that often created some very memorable moments! Some of the work on the 2 disc set was recorded for TV, and some of it as regular studio work – and the full contents of 2 albums are presented here, Diana Ross & The Supremes Join The Temptations and Together – along with a wealth of alternate mixes and previously unreleased tracks as well! Rare tracks include "Amen", "If You Should Walk Away", "A House Is Not A Home", "Got To Get You Into My Life", and "You Gave Me Something" – and regular tracks include "Not Now I'll Tell You Later", "I Second That Emotion", "This Guy's In Love With You", "Funky Broadway", "A Place In The Sun", "The Weight", "Stubborn Kind Of Fellow", and "Can't Take My Eyes Off Of You". 38 tracks in all – with some tunes presented in longer versions than on the original records!  © 1996-2021, Dusty Groove, Inc.
(Out of print, punch through barcode.)