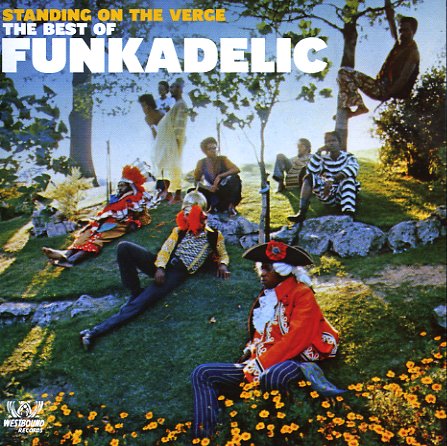 Also available
Funkadelic — Standing On The Verge – The Best Of Funkadelic ... CD 9.99
Funkadelic — Standing On The Verge – The Best Of Funkadelic ... CD 7.99
A heavy best-of from Funkadelic – one that covers the full range of their classic sounds – from the trippy fuzz of the early days to the tighter funk of stardom years! The package has a power that's undeniable – a really massive batch of music that forever changed the face of funk – arguably the best that George Clinton ever had to offer, especially when you realize that Funkadelic was definitely the farthest-reaching of his many musical projects! Most cuts here are in shorter single versions – but there's a few LP-length jams – and titles include "Undisco Kidd", "Maggot Brain", "Cosmic Slop", "Standing On The Verge Of Getting It On", "Sexy Ways", "Better By The Pound", "One Nation Under A Groove (part 1)", "Whatever Makes My Baby Feel Good", "A Joyful Process", "Loose Booty", "I Wanna Know If It's Good To You", "I'll Bet You", "Red Hot Mama", "Comin Round The Mountain", and "I Got A Thing You Got A Thing Everybody Got A Thing".  © 1996-2023, Dusty Groove, Inc.