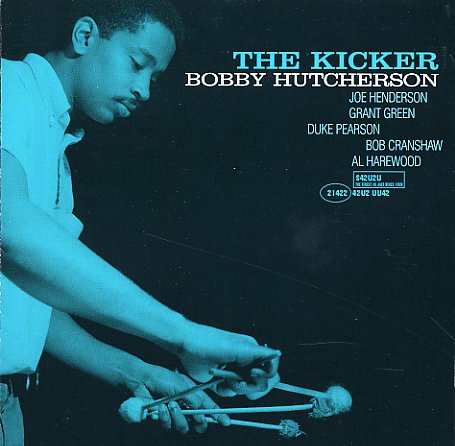 One of the greatest lost sessions ever! Legendary vibist Bobby Hutcherson recorded this set of tracks in his early days with Blue Note – but the set's never come out until now, and its release is cause for rejoicing! The material shows Hutcherson playing in a straight-ahead format, tinged with some of the modernist new thing elements of other recordings from the time, but mostly filled with a soulfulness not always heard on his Blue Note albums at the time. The group includes Duke Pearson on piano, whose lovely lyrical approach works perfectly with Hutcherson's vibes. Joe Henderson plays some great hard-edged tenor, cutting nicely through all the tracks – and Grant Green sits in on half of the material, playing some nice spiralling modal lines on guitar. Many of these titles have been recorded in other versions on later Blue Note albums – but they're all in fantastic versions here, including "Bedouin", "The Kicker", "Step Lightly", and "Mirrors".  © 1996-2023, Dusty Groove, Inc.
(1999 Connoisseur pressing with "Hucherson" misprint on back cover.)

Happenings (RVG remaster edition)
Blue Note, 1966. Used
CD...$11.99
One of the greatest Bobby Hutcherson albums for Blue Note – a classic session recorded in quartet form, with a style that seems to set a whole new standard for the vibes in modern jazz! The group here is sublime – Herbie Hancock on piano, Bob Cranshaw on bass, and Joe Chambers on drums ... CD

Patterns
Blue Note, 1968. Used
CD...$19.99
A really heady set of tracks from vibist Bobby Hutcherson – a record that has him stepping away from the harder sounds of his early modern years – and moving into the sublime mix of soulful and modal styles that would really grow strongly by the end of the 60s! The album's a treasure ... CD

Skyline
Verve, 1999. Used
CD...$6.99
A relatively mellow recent effort from Bobby Hutcherson – one that has him playing both vibes and marimba, and going for a laidback style that allows plenty of spaces for tonal colors and shades of sound! The group's a quintet, with Kenny Garrett on alto, Geri Allen on piano, Christian ... CD

San Francisco
Blue Note, 1971. Used
CD...$34.99
Genius, pure genius! This album's possibly the most perfectly realized set from the team of Bobby Hutcherson on vibes and Harold Land on reeds – a pair who hit territory that's slightly funky, but which is also still touched by the modal spiritualism of some of their earlier work together! ... CD

Face To Face (with bonus tracks)
Blue Note, 1961. Used
CD...$9.99 (LP...$29.99)
One of the all-time great tenor/organ sessions on Blue Note – totally fierce, with a sound that's a lot rawer than most other work on the label! The incredible Baby Face Willette grooves it hard and heavy on Hammond – working in a quartet that includes Fred Jackson on tenor, Grant ... CD

Magic Touch
Blue Note, 1985. Used
CD...$2.99 (LP...$4.99)
A crucial album for the jazz guitar in the 80s – the debut effort of Stanley Jordan, and a set that exploded with a very fresh sound! Jordan has a really unique way of handling his instrument – playing up and down the fret board with both hands – in ways that are often so ... CD