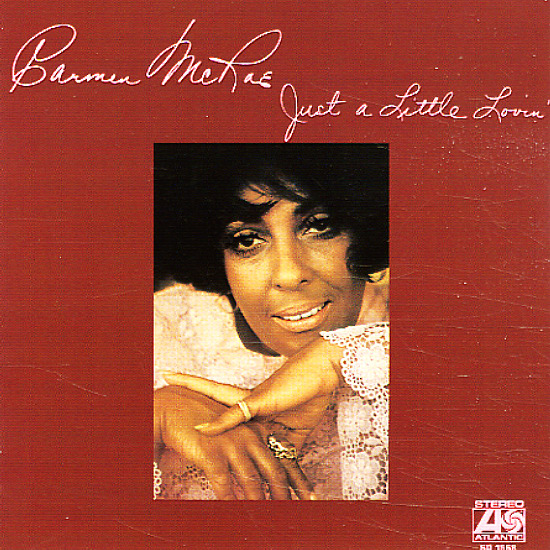 Bold, boozy work from Carmen McRae – a wonderfully mature album from that great time when her style was equal parts jazz and soul – put together here by arranger/producer Arif Mardin, a perfect choice for the record! There's a care to the overall presentation not heard in some of McRae's albums from a few years before – not just jazz vocals with a backing group, but a really rich presentation of some hip, modern, all-adult material that somehow sounds even better in Carmen's hands than anyone else. Titles include the sublime title tune "Just A Little Lovin" – plus"Goodbye Joe", "I Love The Life I Live", "Carry That Weight", "Something", "I Want You", "More Today Than Yesterday", and "Didn't We".  © 1996-2022, Dusty Groove, Inc.
(1841 Broadway pressing. Cover is great!)

Yesterdays (aka Lover Man)
Harmony, 1961. Very Good+
LP...$2.99
An overlooked gem from Carmen – one of her few albums for Columbia from the 60s, and a wonderfully swinging small group session that's got a much more relaxed feel than some of her earlier sets! The album's ostensibly a tribute to Billie Holiday – but it's taken in a way that's ... LP, Vinyl record album

Blue Moon
Decca, 1956. Very Good-
LP...$11.99
Some of the hippest early work ever cut by Carmen McRae – with backings by Tadd Dameron and Jimmy Mundy, and a great selection of songs that brings out all the sophistication in Carmen's style, yet stays away from overly-done standards and love numbers. The set's a perfect example of how ... LP, Vinyl record album

Live & Doin' It
Mainstream, 1965. Very Good+
LP...$2.99
About as strong an example of the genius of Carmen McRae as you could ever hope to find – a live album that displays Carmen's impeccable phrasing in a very stripped-down setting – and one that also swings with a fair degree of sophisticated soul as well! Back in the 50s, Carmen paved ... LP, Vinyl record album