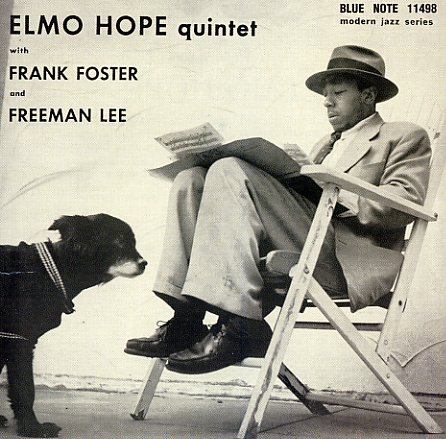 A pretty great little set that combines both of the rare early Elmo Hope 10" LPs for Blue Note – plus some additional material! Introducing The Elmo Hope Trio is seminal early work from Hope – and one of the 10" LP releases that was part of Blue Note's "New Faces – New Sounds" series during the early 50s. Hope's working here with Percy Heath and Philly Joe Jones – and the trio go to town on numbers that include complicated bop tunes like "Carving The Rock" and "Hot Sauce", plus more melodic tunes like "Freffie" and "Mo Is On". As always, Hope proves himself to be one of the greatest pianists in jazz history – right up there with Monk, Herbie Nichols, and Bud Powell, bristling with excitement that few of his contemporaries (save those three) could match! The Elmo Hope Quintet session has Hope grooving in a very modernist approach to bop, working perfectly with a tight little quintet. Frank Foster wails on tenor, Freeman Lee soars on trumpet, and Percy Heath and Art Blakey keep the whole thing going on rhythm – while Hope plays madly on piano, adding in rich tones and colors to a set that might have otherwise been a straighter bop outing. Titles include "Chips", "Crazy", "Abdullah", and "Low Tide". The CD also adds in 2 tracks from the 40 Years Of Jazz collection in 1979 – "It's A Lovely Day Today" and "Crazy (alternate)" – plus 3 from the Art Blakey/Elmo Hope album – "So Nice", "St Elmo's Fire", and "Vaun Ex".  © 1996-2021, Dusty Groove, Inc.
(Out of print.)