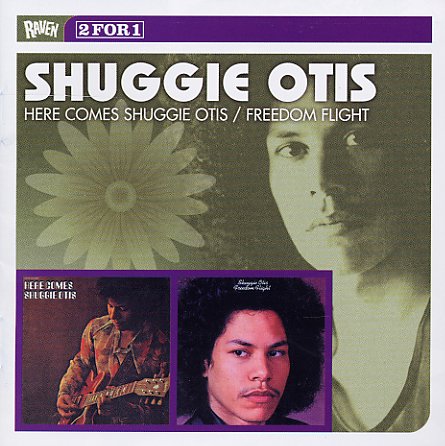 The first 2 Shuggie Otis albums on one CD – and with bonus material, too! Shuggie's well known for his trippy guitar work and vocals on the famous album Inspiration Information, and both of these sets predate that one – showing Shuggie in his formative years, stepping off some early work with his father Johnny Otis, and forging a messed-up mixture of soul, funk, and blues that forever made him one of the odder talents of his generation! Here Comes Shuggie Otis is more of a blues-driven effort, but still has some great guitar work from young Shuggie – but on Freedom Flight, he really takes off. The album's really the birthplace of Otis' psychedelic funky style, and is filled with cool little tracks that groove in a cosmically trippy way! The CD features the tracks "Oxford Gray", "Ice Cold Daydream", "Strawberry Letter 23", "Freedom Flight", "Purple", "Someone's Always Singing", "Sweet Thang", "Me & My Woman", "Funky Thithee", and "The Hawks" – plus the bonus cut "One Room Country Shack".  © 1996-2021, Dusty Groove, Inc.
(Out of print.)