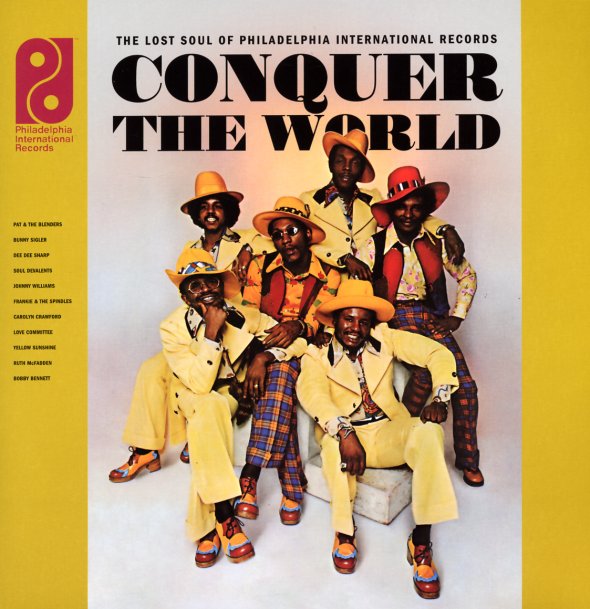 Conquer The World – The Lost Soul Of Philadelphia International Records

Philly International, way past the hits – presented here on a special collection of key rarities from the legendary label! If you think you've heard Philly before, get ready to think again – because the tracks here are all non-iconic gems from the deeper reaches of the label – deeper soul, hipper club, and heavier funk than you might expect from the sweeter chart singles the imprint scored back in the 70s! The package is a masterpiece – way better than we might have expected, and featuring some key tracks that even we'd never heard before – more than enough to have you digging funky 45s for Philly International. Tracks include "Ghetto Woman (parts 1 & 2)" by Ruth McFadden, "Everybody Needs Good Lovin (parts 1 & 2)" by Bunny Sigler, "Days Go By" by Bobby Bennett, "It's So Wonderful" by Johnny Williams, "Makin Up Time (parts 1 & 2)" by Frankie & The Spindles, "Hard Workin Man" by Pat & The Blenders, "Theme From Five Fingers Of Death" by Bunny Sigler, "Good & Plenty" by Carolyn Crawford, "Yellow Sunshine" by Yellow Sunshine, "Darling Come Back Home" by Love Committee, and "Grasshopper" by The Soul Devalents. CD features 4 bonus tracks – "Ruby's Surprise Party" by Ruby & The Party Gang, "Stop Taking My Love" by The Mellow Moods, "Love Is Here" by The Futures, and "The Big Hurt" by People's Choice.  © 1996-2022, Dusty Groove, Inc.
(Out of print.)

Superfly (expanded version)
Curtom/Rhino, 1972. Used 2 CDs
CD...$9.99
Curtis Mayfield's lasting classic – and an album that the world will remember forever! Apart from being his hugely successful entry into the blacksploitation soundtrack field, this album's also a monster set of grooves that includes some of Curtis' funkiest work ever – a record that ... CD