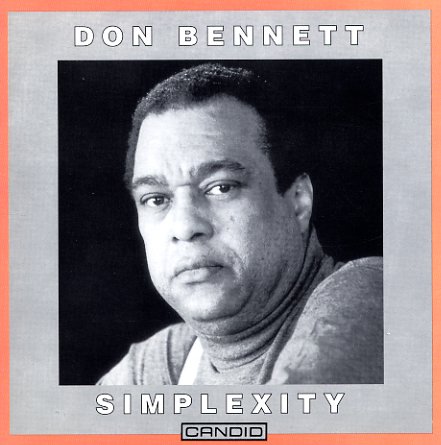 A trio date with Don Bennett on piano, Aleksandar Milosevic on bass, and Doug Sides on drums. Tracks include "Quarter Moon", "Delilah", "On Green Dolphin Street", "My Romance", "Spanish Blue", and "Simplexity".  © 1996-2021, Dusty Groove, Inc.
(Out of print.)

Air
Candid (Germany), 1960. Used
CD...$10.99
Cecil Taylor and Archie Shepp – two key modern figures of the 60s, working here together in a seminal session recorded at the start of the decade! The album's approach is definitely dictated by Taylor – as the tunes have a piano-driven quality that's quite different than most music ... CD

Newport Rebels
Candid (UK), 1960. Used
CD...$9.99
A classic early 60s session for Candid Records – put together by a group that includes Charles Mingus, Max Roach, and a host of other musicians who were working here as "Newport Rebels" – by setting up the Jazz Artists Guild Festival as a protest against the increasingly ... CD

Jumpin' Punkins
Candid, 1961. Used
CD...$9.99
Pretty well peak era material from pianist Cecil Taylor – doing his thing with incredible line up of jazz greats on a couple NYC dates from early 1961! A couple of the pieces here are pure magic – we're especially loving the bits where Cecil is kind of hitting the keys heavily, ... CD