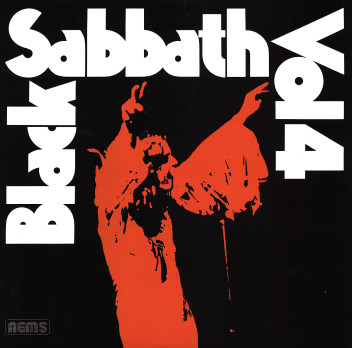 The fourth nearly flawless album of heavy genius from Black Sabbath – featuring some of the mightiest rock riffs ever! Vol 4 is just the tiniest of notches below Master Of Reality and Paranoid in overall greatness – which is the tiniest of possible complaints given that those previous two albums are among the few truly perfect rock and roll albums ever recorded! But this one has "Supernaut". Enough said. Other titles include "Wheels Of Confusion", "Tomorrows Dreams", "Changes", "FX", "Snowblind", "Cornucopia", "Under The Sun" and more.  © 1996-2023, Dusty Groove, Inc.
(Green label stereo pressing. Cover has ring and edge wear, half split top seam, wide clear tape at the spine, splash stains in front, and a light stain in back. Booklet is bent at the front page, with some wrinkles, and is partially unglued.)

Master Of Reality
Vertigo, 1970. Very Good+
LP...$39.99
The third album by Black Sabbath – the album that put the heavy in metal – one of the most influential rock albums of all time and a record that finds Sabbath at absolute peak perfection! This is the one that set the Sabbath style in stone, honing in the the heavy riffs, thundering ... LP, Vinyl record album

Insight Out
Warner, 1967. Very Good
LP...$4.99
Fantastic dreamy pop from one of the greatest harmony groups of the 60s – a set that really has The Association hitting their stride, and finding a way to really let their vocals soar! The sound here really sets the group apart from some of the more old-school harmony acts of the decade ... LP, Vinyl record album

Solid Gold
Warner, 1981. Near Mint-
LP...$29.99
A stunning second set from the mighty Gang Of Four – and a record that's got all the power and politics of their famous Entertainment debut! The set's got some wonderfully heavy basslines amidst the scratchy guitar that makes the group so great – but nothing's too polished, certainly ... LP, Vinyl record album