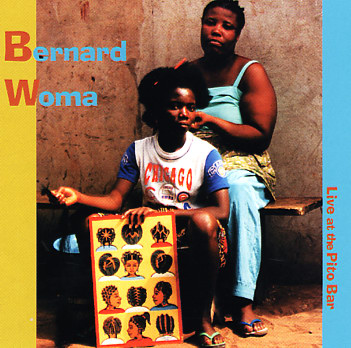 Live At The Pito Bar

A really amazing little record, with a sound that's unlike anything else we can think of! The session was done as a field recording in an outdoor bar in Ghana – as an effort to focus on the balafon talents of Bernard Woma – but the overall presentation of the music is a fair bit different than some of the other balafon albums we've heard! First of all, the xylophone-like instrument isn't played just with mallets on the keys by Woma, but also at the same time by another player – who uses sticks on both the frame and the keys in a highly percussive manner. Added to this is a third musician on additional percussion – making for a highly rhythmic sound that echoes out with the strong vibrations of the main notes on balafon! The sound is almost Congotronic in nature – a bit distorted, but highly energetic – and the crowd noises of the field recording only add to the intensity of the music. Titles include "Kelewele", "Fufu", "100 Cedis", "Gori Foto", and "Tiebou Dienne".  © 1996-2020, Dusty Groove, Inc.
(Out of print.)