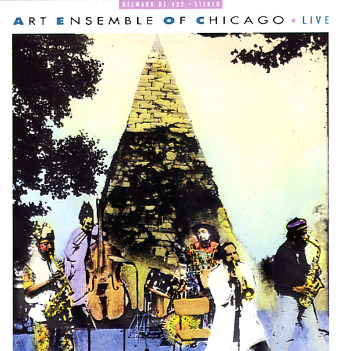 One of the best post-Paris live dates by the Art Ensemble Of Chicago – recorded right on their southside home turf in Chicago, as something of a homecoming after their years abroad! The performance is really one continuous piece, divided up into chapters – and it starts off with an intensity that's bolder than much of the group's previous recordings – an almost-free sort of sound that's quite raw, and which must have been a great way to announce their presence back on the Chicago scene. As the piece moves on, it slows a bit in pace, and opens up more in mood – but always has an edge that's quite distinct – almost free of some of the wit that marked the Ensemble's work from a few years before. The core lineup features Lester Bowie on trumpet and flugelhorn, Roscoe Mitchell and Joseph Jarman on saxes, Malachi Favors on bass, and Don Moye on drums and percussion – but as always, all players get their hands on plenty of other instruments during the performance – an array of horns, gongs, bells, whistles, bike horns, and more – all used to great effect! Sections of the work are titled "Duffvipels", "Checkmate", "Dautalty", and "Mata Kimasu".  © 1996-2021, Dusty Groove, Inc.

Early Combinations
Nessa, 1967. Used
CD...$9.99 (CD...$13.99)
An important pre-Art Ensemble Of Chicago moment – one that has most of the group coming together in a pair of rare recordings in the home of Lester Bowie – already sounding amazingly creative as a unit! The sound is almost freer than later work by the group – or certainly at the ... CD

Live In Paris
BYG/Fuel 2000, 1969. Used 2 CDs
CD...$18.99
Seminal work from the Art Ensemble of Chicago – recorded during their most creative period ever! The album was recorded live in October of 1969 – at a time when the group had pulled up roots and moved to France for a few years, bursting on the European scene with unique creativity that ... CD