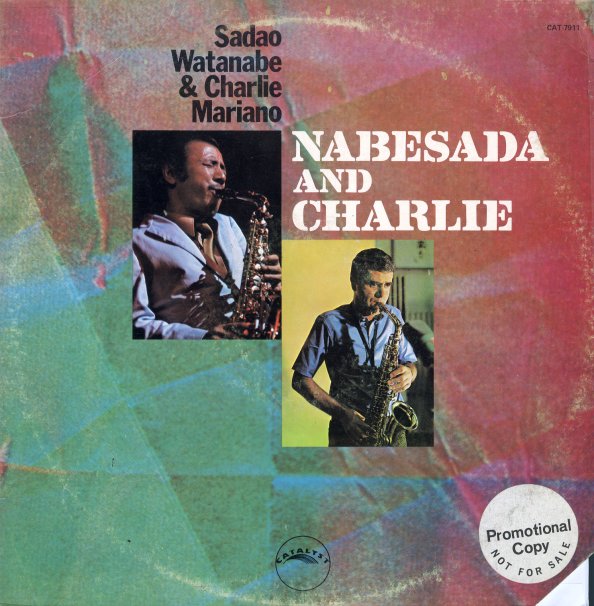 A rare look at a little-known chapter in the career of Charlie Mariano – recordings made while living in Japan in the late 60s, done in the company of up-and-coming Japanese reedman Sadao Watanabe! The pair seem perfectly matched here – no surprise, given that both players are ones that come from a mainstream background, but who can also bring in earthier, more primal tones to their instruments. And while the tracks in the set are mostly familiar 60s standards and soul jazz tunes, the interplay between the reeds is really tremendous – dipping, turning, and carving out notes with sharp edges and unusual turns that take the record way past the obvious. Many of the tunes have a bossa groove at the base – in keeping with Watanabe's Brazilian-influenced sound of the era – but the presence of Mariano makes the record sound a fair bit different as well! Titles include "One Note Samba", "Work Song", "Goin Home", "On The Trail", "Comin' Home Baby", "Black Orpheus", and "Lord Don't Let Them Drop that Atomic Bomb On Me". A landmark in Japanese jazz – issued here in the US pressing from the late 70s.  © 1996-2023, Dusty Groove, Inc.
(Mid 70s issue. Cover has ring and edge wear and lightly bent corners.)

Iberian Waltz
Takt (Japan), Late 60s. Near Mint-
LP...$28.99 38.99
A rare recording from Charlie Mariano's "lost" years in Japan – an under-documented period of his career next to earlier American work and later 70s European fusion! At the time of the set, Charlie was living in Japan with (then) wife pianist Toshiko Akioshi – and opening up ... LP, Vinyl record album

Gannon's Back In Town
Catalyst, Mid 70s. Very Good+ Gatefold
LP...$3.99
One of the more unusual albums on the short run of great records on the 70s Catalyst label – a set led by bassist Jim Gannon, and featuring work from a larger group on side one, and a smaller combo on side two – players who include Bobby Shew on trumpet, Marry Covelli on tenor, May ... LP, Vinyl record album

Vous Ete's Swing
Catalyst, 1976. Near Mint- Gatefold
LP...$6.99 16.99
A lost soul jazz treasure from drummer Ron Jefferson – one of the under-appreciated and excellent sessions cut by Catalyst in the mid 70s, and a swirling mix of spiritual jazz themes and really righteous playing! The group features Richard Davis on trumpet, Roberto Miranda on bass, and Wayne ... LP, Vinyl record album