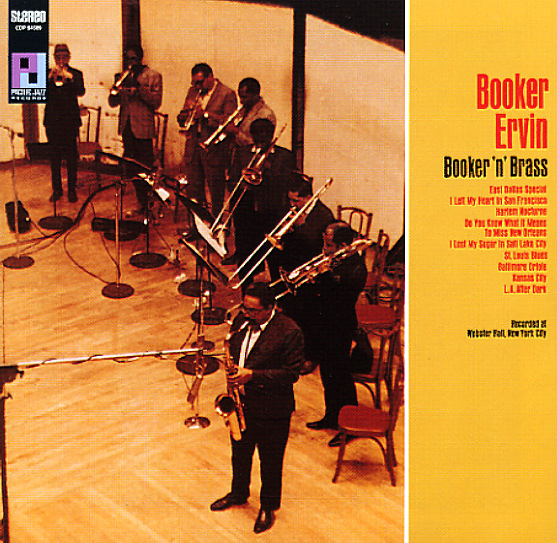 Although the "with brass" tag of this one might make you think it's a hokey big band album, the record is actually a far-reaching modernist session that has Book's edgey tenor fronting a large-ish group filled with some of the best trumpet and trombone players of his generation – including Freddie Hubbard, Charles Tolliver, Richard Williams, and Johnny Coles. The rhythm section is pretty darn great too – and includes Lenny McBrownie, Reggie Johnson, and Kenny Barron. The presence of all of these soul jazz modernists keeps the set from falling into any of the cliches you might expect, and the album's an extremely fresh batch of tracks that is one of the last albums Booker ever recorded. Titles include "LA After Dark", "Salt Lake City", and "Baltimore After Dark".  © 1996-2022, Dusty Groove, Inc.
(Out of print.)

Lament For Booker Ervin
Enja (Germany), 1965/1975. Used
CD...$16.99
A compelling split album – both a performance by and a tribute to the legendary tenorist Booker Ervin – issued after his death, but also featuring a rare European performance from the 60s as well! The album features one long track by Booker – "Blues For You" – ... CD

That's It
Candid (Germany), 1961. Used
CD...$6.99 (CD...$14.99)
A tremendous non-Prestige moment from tenorist Booker Ervin – one of his first albums ever as a leader, and a record that bristles with 60s modern energy! The group here is only a quartet – with Horace Parlan on piano – and the album's got Booker's amazing tenor right out front, ... CD

Structurally Sound
Pacific Jazz/Blue Note, Late 60s. Used
CD...$22.99 (LP...$22.99)
One of Booker Ervin's last sessions – quite different than some of his earlier work, and a great indication of the way that he was stretching his style in the years before his untimely death. The group's a committed band of modernists, and includes a young Charles Tolliver on trumpet, plus ... CD

Freedom Book (RVG remaster edition – with bonus track)
Prestige, 1963. Used
CD...$7.99
One of the most far-reaching, exploratory records cut by Booker Ervin during the 60s – a set that really lives up to the "freedom" in its title! The album really takes off from some of Ervin's other work of the time – and stands along next to the equally-great Space Book as a ... CD

Sunset Eyes (with bonus tracks)
Pacific Jazz, 1959/1960. Used
CD...$9.99
Teddy Edwards at the height of his powers – packing a tight, soulful punch that made him one of the most popular players on the west coast in the early 60s – and a great link between earlier R&B tenorists and the leaner sound of 60s jazz! Edwards has a nice gutbuckety tone at times ... CD

Big Swing Face
Pacific Jazz, Late 60s. Used
CD...$3.99
Fantastic work from the legendary Buddy Rich – one of his Pacific Jazz albums from that stretch when Buddy was opening up his bag, and getting very groovy in his music! The album's a live one – and as with the rest from the decade, really has the Buddy Rich sound moving forward, thanks ... CD

Portraits
Pacific Jazz (Japan), 1963. Used
CD...$9.99
An excellent album from Gerald Wilson – one that features some of his most inventive writing and arranging to date! The album's a perfect balance between the two sides of LA jazz in the 60s – the soul jazz groove, and the growing modern scene – which often didn't get the larger ... CD

Extension (LP sleeve edition)
Pacific Jazz/International Phonograph, 1963. Used Gatefold
CD...$12.99
An early moment of genius from the young Clare Fischer – one of his first sets for a larger ensemble, and the start of years of great work to come! Previous Pacific Jazz sessions featured Fischer in a piano trio – but this album lets Clare loose on a host of his own inventive ... CD