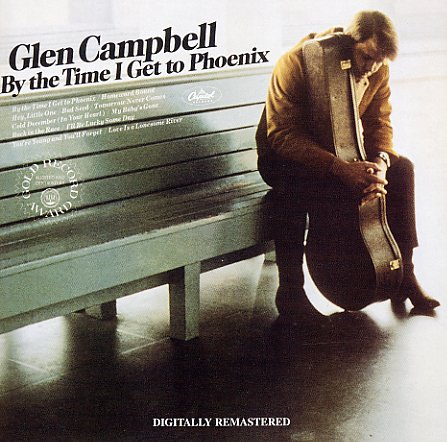 By The Time I Get To Phoenix

The pairing of Glen Campbell and Jimmy Webb is probably one of the greatest ideas ever in the history of pop music – as you'll hear on the album's title track, "By The Time I Get To Phoenix". Glen's original hit version of the song – written by a wee Jimmy at a young age – forever cut the way for his unique blend of pop, country, and easy vocal styles. The tune also kicks off this pretty nice little album of tracks that features great lesser known numbers, including some surprisingly great country covers. Titles include "Back In The Race", "My Baby's Gone", "Tomorrow Never Comes", "Bad Seed", "Love is A Lonesome River", and "I'll Be Lucky Some Day".  © 1996-2022, Dusty Groove, Inc.
(Rainbow label stereo pressing. Cover has small seam splits and light surface wear.)