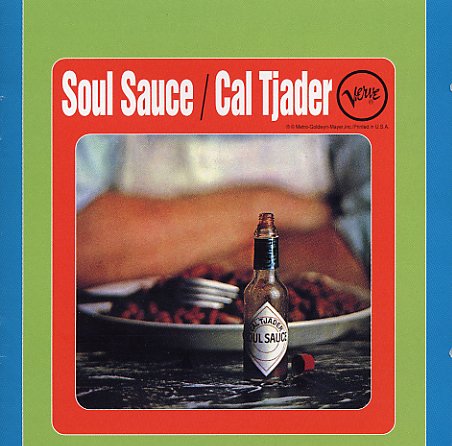 Arguably THE classic Cal Tjader album of the 60s – a landmark album that crossed over equally into Latin, jazz, and mainstream audiences – and a stone cooker that's filled with smoking little grooves! The set's probably best known for its title track "Soul Sauce" – one of the biggest jazz hits of the 60s, and a catchy groover that was built around a riff from Dizzy Gillespie, but which also featured a groovier 60s sound, thanks to Cal's use of vibes. The whole album follows in similar format – and features great work by a core combo that includes Armando Pereza on congas, Lonnie Hewitt on piano, and Johnny Rae on drums. Titles include "Soul Sauce" – also known as "Guacha Guaro" – plus the tracks "Joao", "Leyete", "Maramoor", and a killer reading of "Afro Blue" that features guest appearances by Donald Byrd, Jimmy Heath, and Kenny Burrell. Plus, the CD reissue also includes 3 excellent bonus cuts: "Monkey Beams", "Ming", and the groovy "Mamblues".  © 1996-2021, Dusty Groove, Inc.
(Out of print.)

Al Cohn Quintet Featuring Bob Brookmeyer
Coral/Verve, 1956. Used
CD...$5.99
A rare and unusual chapter in the career of Al Cohn – and an incredible set cut in the mid 50s with Bob Brookmeyer on trombone! The style's a bit like that used by Al and Zoot Sims together – tightly arranged shorter tracks, with a focus on well-crafted horn work, but enough space to ... CD