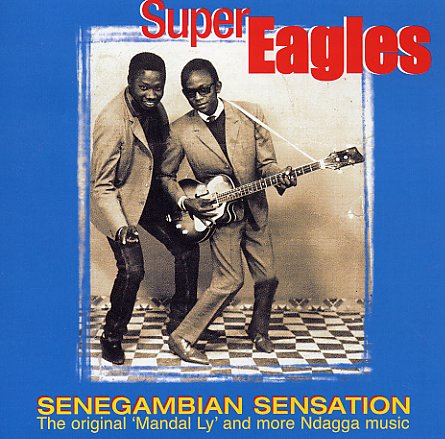 Classic material from one of Gambia's greatest bands! This staunchly modern group shook things up at home in the late 60s, playing through Marshall amps and dressing in thrift store duds for a sartorial splendor at home with Swinging London. The band covered "Hey Jude" and wrote some dazzling original rock-soul tunes – including the great "Love's A Real Thing", recently heard as the title track of Luaka Bop's African psychedelic collection – but more importantly they embraced and updated the traditional styles that most contemporary bands ignored. Singing in Wolof and broken English they forged a beguiling mix of highlife, Congolese rumba, and Afro-Cuban forms, blending in native Mandinka, Fula, and Jola traditions, all delivered with a crisp, rhythmic propulsion. Tracks include "Mandal Ly", "Viva Super Eagles", "Aduna Poti Ndala", "Aliou Gori-Mami", and "Bada Tourey".  © 1996-2020, Dusty Groove, Inc.
(Out of print.)