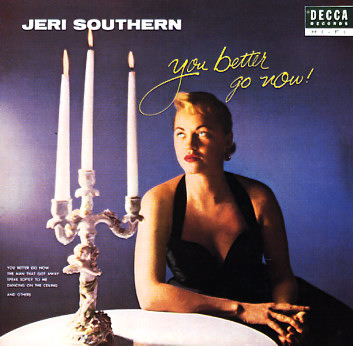 An early album that compiles material that Jeri Southern recorded in her first few years for Decca Records – tunes done in the dreamy, romantic style that was one of Southern's key calling cards in the 50s! The style is never too sleepy, nor too commercial – and instead, Jeri's got a great way of putting over a moody late nite tune without resorting to common cliches. Backings are by Sy Oliver, Camarata, Sonny Burke, and others – but the album's got a nicely unified feel, thanks to Jeri's strong vocals in the lead. Torchy stuff, but in an uncommon way – and with titles that include "When I Fall In Love", "Give Me Time", "Something I Dreamed Last Night", "Remind Me", "That Ole Devil Called Love", and "What Good Am I Without You".  © 1996-2021, Dusty Groove, Inc.
(Black label pressing with deep groove. Cover has a cut corner.)

Jeri Southern Meets Johnny Smith
Roulette, 1958. Very Good+
LP...$28.99
Jeri Southern can be a hell of a jazz singer when she wants – and that was definitely the case on this gem of a record – a laidback small combo setting with excellent guitar accompaniment from Johnny Smith! Smith's trademark tones really color the record in a great way – ... LP, Vinyl record album