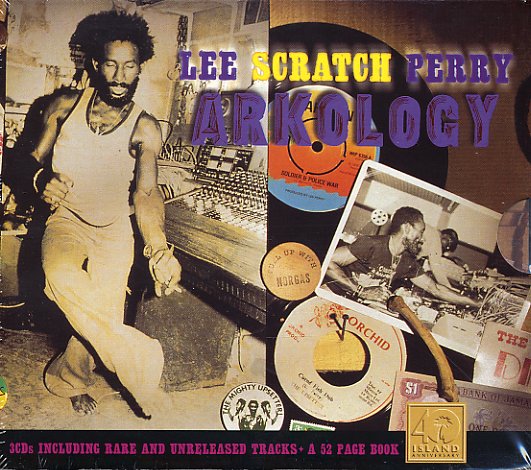 The mothership has landed! While attempting to make a definitive compilation of all of Scratch's productions would take well more than 3 CDs, this set does a fine job of touching on important highlights and unearthing a few hidden gems, from the fertile Black Ark period. 55 tracks in all, with a fat 52 page book with extensive notes and loads of great photos, we'll let the exhaustive track list speak for itself: Max Romeo "One Step Forward", "War In A Babylon", "Chase The Devil" and "Norman", Devon Irons "Vampire", the Heptones "Sufferer's Time", "Mr. President" with Jah Lion, "Why Must I (version)" with Lee Perry and "Make Up Your Mind", Junior Dread "Sufferer's Heights", The Congos "Don't Blame On I", "Feast Of The Passover" and "CongoMan", The Meditations "Much Smarter", "Life Is Not Easy", and "No Peace", Junior Murvin "Tedious", 'police & Thieves", "Bad Weed" and "Roots Train" with Dillinger, Mikey Dread "Dread At The Mantrols", Errol Walker "In These Times", "John Public" and "John Public (version)" with Enos Barnes, Glen DaCosta "Magic Touch", Jah Lion "Soldier & Police War", Raphael Green & Doctor Alimantado "Rasta Train", Augustus Pablo "Vibrate On", The Upsetter Review with Junior Murvin "Closer Together", Keith Rowe "Groovy Situation", George Faith "To Be A Lover (Have Some Mercy)", Lee Perry "Dub Revolution Pt. 1", "Dreadlocks In Moonlight", "Soul Fire", "Curly Locks" and 'Roast Fish & Cornbread" and The Upsetters "One Step Dub", "Vamp A Dub", "Sufferer's Dub", "Much Smarter Dub", "Life Is Not Easy Dub", "Revelation Dub", "In These Times Dub", "Grumblin' Dub", "No Peace Dub", "Party Time pt. 2", "Vibrator", "Bird In Hand", "Dyon Anasawa" featuring Full Experience, "Rastaman Shuffle", "Groovy Dub" and "Corn Fish Dub".  © 1996-2021, Dusty Groove, Inc.
(Out of print. Please note that the the slipcover is not included in this set. 3 individual CD cases and the large booklet.)

Legend – The Best Of Bob Marley & The Wailers
Island, 1970s. Used
CD...$1.99
While we're not big on career retrospective best of's, especially artists like Marley, whose been collected over & over, this is actually a respectable set, and the vinyl's pretty darn hard to get ahold of anymore. Includes 14 classics, like "Get Up Stand Up", "Exodus", ... CD

Toots Live
Island (UK), 1980. Used
CD...$9.99
A triumphant live performance from Toots Hibbert and The Maytals – recorded in London at a time when the group was really riding high – able to serve up their music with a sense of majesty that really fit the spirit of the larger arena! The tunes are mostly classics, but they've got a ... CD