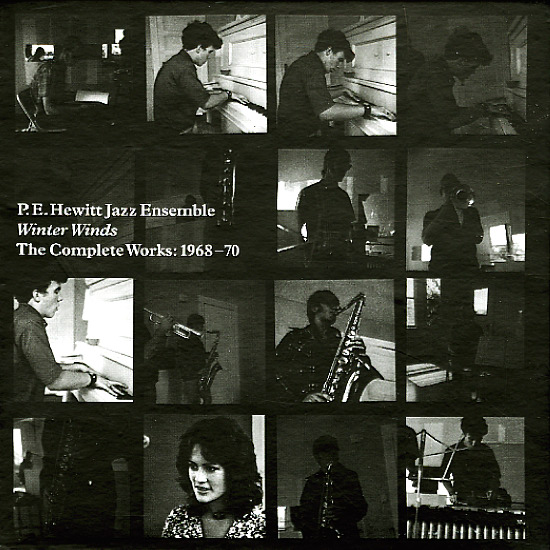 Brilliantly soulful jazz from the PE Hewitt Jazz Ensemble – a group with a style that mixes the sunny and the spiritual – a box set featuring the originally self-released trilogy of releases Jawbones (1968), Since Washington (1969), and Winter Winds (1970) in one great package from Now Again! Of the trilogy, each is rare enough that we hadn't seen an original LP as of the time of release of this set, and a Japanese CD release of Winter Winds was our only intro to the soulful ingenuity of jazz composer/arranger/vibraphonist/pianist Hewitt. The LPs were actually only pressed in runs of 100 pieces per (!!!) – so this set compiling them is quite revelatory! His group works at a level that's definitely in line with some of our favorite indie jazz at the time – really pushing the boundaries with a great sense of spirit – stretching out towards new ideas, yet never getting too free or too outside to lose their sense of swing. But at another level, there's a slightly groovy undercurrent, too – one that comes from the wordless vocals on Winter Winds, a style that reminds us a bit of the singing on the Sound Of Feeling record with Oliver Nelson – particularly given the modal grooves on the best numbers, but the strength of the groove overall holds true on all three albums. Rhythms are really in the lead at the strongest points – driven by Phil Hewitt's work on piano and vibes, and topped with alto sax and flugelhorn, too. Players include Dick Zemlin on trumpet & piano, Charley Forsberg on alto, Richard Zemlin on flugelhorn, Rick Hearns & Marty Keller on drums. Jawbones includes "Free", "Don't Judge Your Brother", "Ihadmyheadoverthechickensouppot" and more. Since Washington includes "Alone And Watching", "Sad Sunday", " 3AM" and more. Winter Wind includes "I'm Wondering Why", "Oma Rakas", "The Winter Wind", "Tuija", "Baon Que Bash", "Ill Love Song", and "It's Got Two & That's Alright". The box includes reproductions of the original album art plus liner notes, and a 2009 interview by Eothen Alapatt.  © 1996-2021, Dusty Groove, Inc.

Beginning Of A New Birth/As Time Flows On
Now Again, Mid 70s. New Copy 2 CDs
CD...$11.99 20.98 (CD...$9.99)
A lost legacy in spiritual jazz – two albums recorded by a Boston group who worked far from the limelight in New York – in a very underground scene where they recorded these two very special albums in the 70s! Their sound is very collaborative and freewheeling – an approach that ... CD