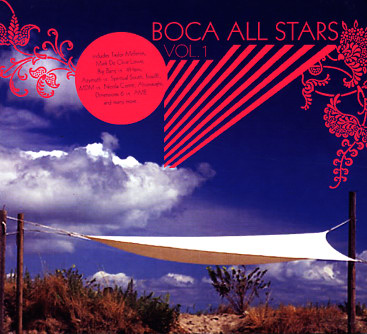 One of the hippest compilations we've heard in a long time – warm and jazzy grooves, all pulled together in support of the summer Boca scene in Italy! The collection's a joint project with Arision Records, and has plenty of traces of the styles of that hip London imprint – a good deal of cosmic soul, future fusion, and more – pulled not just from Arision artists, but also a host of other key current acts from the European scene. Titles include "Take Off (Nicola Conte Campi's idea version)" by Marco Di Marco, "Blue Eye Blak" by Colonel Red, "Broken Vibes" by Taylor McFerrin, "Fontana Blue (LTJ X-perience re-edit)" by MDM, "Sweet Y Sour (4 Hero rmx)" by Big Bang, "Roda Pio (Spiritual South rmx)" by Azymuth, "Golpe Tuyo Calinda" by Afronaught, "Living In The Sunshine (Ame Ohio dub)" by Dimension 6, "U Better Run" by Rasiyah, and "Primavera" by Isoul8.  © 1996-2021, Dusty Groove, Inc.
(Out of print.)