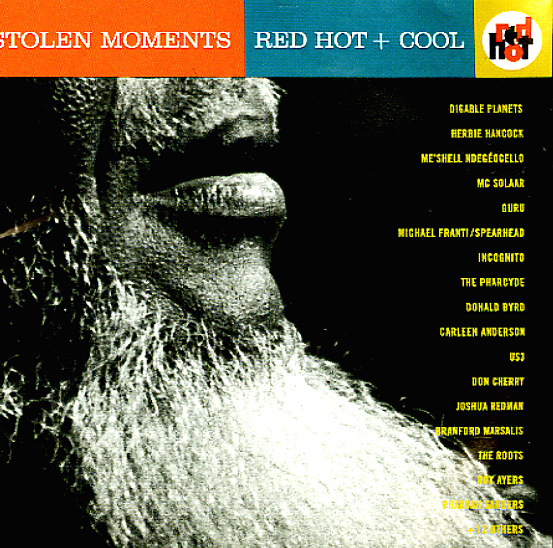 Jazz-meets-hip hop-meets-new grooves compilation put together by the folks at the Red Hot organization in the mid 90s. Titles include "Time Is Moving On" by Donald Byrd, Guru, and Ronny Jordan; "Stolen Moments" by United Future Organization; "This Is Madness" by The Last Poets & Pharoah Sanders; "The Scream" by US3 & Joshua Redman; "Trouble Don't Last Always" by Incognito, Carleen Anderson, & Ramsey Lewis; "Nocturnal Sunrise" by Me'Shell NdegeOcello & Herbie Hancock; "Proceed II" by The Roots & Roy Ayers, "Un Ange En Danger" by MC Solaar & Ron Carter, and "The Rubbers Song" by Pharcyde – plus a bonus disc with two versions of "A Love Supreme" and remix of Creator Has A Master Plan".  © 1996-2021, Dusty Groove, Inc.
(Out of print, includes bonus disc. BMG Direct pressing.)