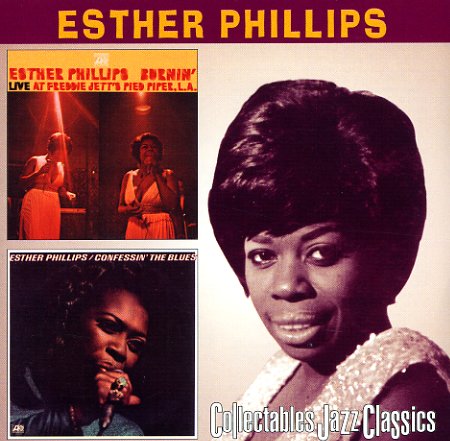 2 albums recorded by Esther in the years before she broke into big fame on the Kudu label. Burnin is a stunning live set that marked Esther's move from being a loud young R&B singer into an older, more mature interpreter of material in a more jazzy style. She's backed here by a good group that includes Jack Wilson on piano, Richard Tee on organ, Chuck Rainey on bass, and Cornell Dupree on guitar – and she moves through a heartbreaking set of material that heralds her later 70's recordings for Kudu. Tracks include "Don't Let Me Lose This Dream", "And I Love Him", "Shangri-La", and "Please Send Me Someone To Love". Confessin points back at Esther's earlier career in R&B, but has a nice jazzy finish – thanks to players like Sonny Criss, Teddy Edwards, and Herb Ellis – and the record also features a few more sides from the Burnin sessions at Freddie Jett's Nightclub in LA. Titles include "Romance In The Dark", "I Wonder", "I'm Getting Long Alright", "In The Evenin", and "I Love Paris". Due to time limit restrictions, the CD excludes the cuts "I'm Getting Long Alright" and "It Could Happen To You" from the LPs.  © 1996-2021, Dusty Groove, Inc.
(Out of print.)

Performance (Japanese pressing)
Kudu/King (Japan), 1974. Used
CD...$13.99
Not a live album – as you might think from the title – but a tight batch of tunes that shows the full funk and soul talents of the legendary Esther Phillips! The album's got a nicely dark undercurrent at times – a sound that's not as smooth as some of Esther's other Kudu albums ... CD

For All We Know (Japanese pressing)
Kudu/King (Japan), 1975. Used
CD...$14.99
Smooth and sophisticated grooving from Esther Phillips – a record that really has her shaking off the rag-tag and rootsy modes of earlier years, and gliding sweetly into the mainstream! Phillips' vocals are still as soulful and compelling as ever, but the backings are quite full – ... CD

Killing Me Softly
Atlantic, 1973. Used
CD...$4.99
Roberta Flack at her most masterful – balancing righteous soul at it's most spiritually resonant and more mainstream accessible melodies – from her classic years at Atlantic when she was forging a whole new sound that was a unique blend of soul, jazz, and spiritualism. Each of Roberta's ... CD