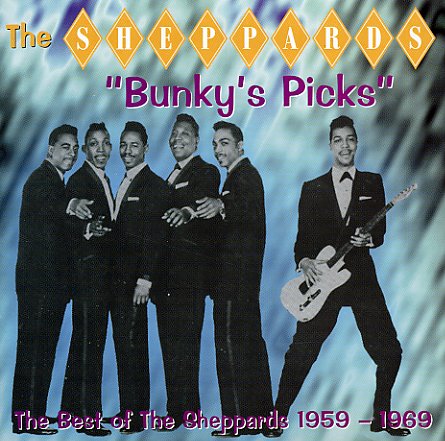 Bunky's Picks – The Best Of The Sheppards

Huge in Chicago, but not nearly as well-known elsewhere, The Sheppards were one of the windy city's best-ever vocal groups, and they had a rich deep style that spanned the gap between R&B and Soul, in a similar manner to The Impressions. This long-overdue set brings together 25 cuts by the group, and it spans the years 1959 to 1969, giving you a complete look at the group by including raw early R&B material, plus later smoother harmony soul singles from the late 60s. We love the later stuff especially, but all the stuff on here's pretty darn nice – and all cuts feature production by the legendary Bill "Bunky" Sheppard, the Chi-soul genius from whom the group took their name. Titles include "Your Love (Has Got A Hole In It)", "Loving You", "Glitter In Your Eyes", "Tragic", "So In Need For Love", "Never Let Me Go", and "I'm Not Wanted".  © 1996-2021, Dusty Groove, Inc.
(Out of print.)

Get On The Good Foot
Polydor, 1972. Used
CD...$24.99 (LP...$49.99)
A really great double-length set from James Brown – maybe slightly less iconic than some of his other classics from the early 70s, but a record that really shows the man stretching out and finding his groove! The whole thing is a great example of the new freedoms that Brown was experiencing ... CD

Keep Movin' On
Abkco/RCA, Early 60s. Used
CD...$3.99 (LP...$36.99)
A brilliant overview of Sam's best secular soul from the 60s – a well-done collection that contains tracks from Sam's early sessions for RCA, and which presents the material with a full set of notes by Peter Guaralnick, and complete details on all the sessions! Some of the tunes on here were ... CD

Keep Movin' On
Abkco/RCA, Early 60s. Used
CD...$3.99 (LP...$36.99)
A brilliant overview of Sam's best secular soul from the 60s – a well-done collection that contains tracks from Sam's early sessions for RCA, and which presents the material with a full set of notes by Peter Guaralnick, and complete details on all the sessions! Some of the tunes on here were ... CD