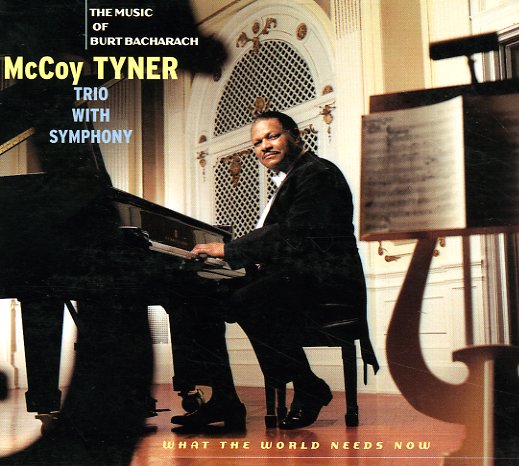 What The World Needs Now – The Music Of Burt Bacharach

With Christian McBride on bass and Lewis Nash on drums.  © 1996-2022, Dusty Groove, Inc.
(Out of print. Digipak has significant wear.)

Double Trios
Denon (Japan), 1986. Used
CD...$11.99
Bold work from McCoy Tyner – a sweet set recorded for the Japanese Denon label in the 80s! The title's a reference to two different trios used by Tyner for the record – one with Avery Sharpe on bass and Louis Hayes on drums, plus a bit of percussion from Steve Thornton – the ... CD

Fly With The Wind (Keepnews collection – with bonus tracks)
Milestone, 1976. Used
CD...$8.99
Don't be put off by the late date of the session, because this is an excellent album from McCoy Tyner – and one with a very spiritual groove that's clearly inherited from Coltrane! The album's based around longer compositions arranged by Tyner, and orchestrated by the great William S Fischer ... CD

Horizon (Keepnews collection – with bonus track)
Milestone, 1979. Used
CD...$18.99
A bit of a change for McCoy Tyner – but a set that's every bit as righteous as his other classics from the 70s! The lineup here is slightly different – with John Blake's violin playing a strong role in the sound, and lots of percussion from Guilherme Franco giving the set an almost ... CD

Prelude & Sonata
Milestone, 1995. Used
CD...$4.99
Understated genius from McCoy Tyner – and exactly the sort of record that shows why his catalog is always worth searching out! The album's got a lot more subtlety than his immediate post-Coltrane sides of the 70s – righteousness maybe a bit more on the backburner, but not so much so ... CD

Illuminations
Telarc, 2003. Used
CD...$5.99
A relatively recent set from pianist McCoy Tyner, but one that shows the same great ear for choosing a horn that we love in his 70s classics! As with those records, a key force on the recording here is altoist Gary Bartz – a player who's always great on his own, but seems to take on a ... CD

Things Ain't What They Used To Be (with bonus tracks)
Blue Note, 1989. Used
CD...$4.99
A nice later set – with a fair bit of solo material, but also a few duets each with John Scofield on guitar and George Adams on tenor! Includes the bonus tracks "Lush Life", "Sweet and Lovely", and "Song For My Lady". CD