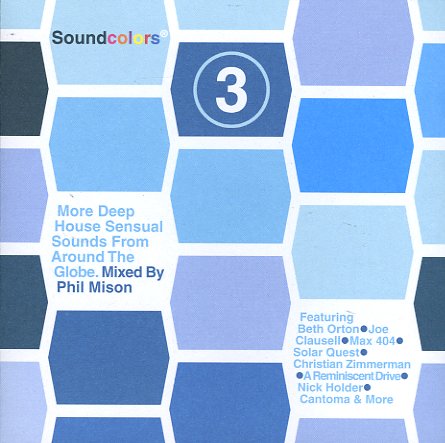 The third entry in this great series! London DJ Phil Mison takes it to the next level – and serves up a sophisticated blend of house tunes from around the world, putting special emphasis on tracks with nice jazzy riffs, and the kind of clever production that puts them a few notches above the usual dancefloor fodder. CD is continually mixed, but all the tracks run at their full length. Titles include "Ambrosia" by A Reminiscent Drive, "You're Still Here" by Wambonix, "Pancho" by Saudaco Ao Orixas, "Spiritual Insurrection" by Joe Claussell, "Summer Daze" by Nick Holder, "Diary Of A Lost Girl (mojave rehab mix)" by Christian Zimermann, "Another Time" by Flow, and "Central Reservation (spiritual life/badan rmx)" by Beth Orton.  © 1996-2021, Dusty Groove, Inc.
(Out of print.)

Soundcolors – Mixed By Phil Mison
Xtreme (UK), 1998. Used
CD...$6.99
Like all of the great compilations on Xtreme, this is a blinding mix of underground tunes, put together by one of London's top DJs, with a sound and style that's far fresher than the usual throwaway comps! Phil Mison's been djing in London clubs for the better part of the past decade, and he's ... CD

Soundcolors 2 – More Sensual Sounds From the Depths Of Summer Madness
Xtreme (UK), 1999. Used
CD...$4.99
Second fab volume of modern tunes and abstract grooves – mixed, like the first one, by Phil Milson from the Legendary Cafe Del Mar! The album's a seamless wall of sound, with moods, emotions, and colors slowly sliding into one another across the surface of Phil's turntables – beginning ... CD